I first died in Subnautica because I ran out of water. This may seem painfully ironic, like being run over by an ambulance in Grand Theft Auto. Yet, while water may be abundant in Subnautica, making it drinkable is another matter entirely. To make drinkable water in Subnautica, you first must disinfect it with bleach. To make bleach, you need to collect salt. This is definitely ironic, given it’s the salt (or salts) in seawater that makes it toxic to humans. But the salt I needed came in the form of crystals on Subnautica’s ocean floor, and there were none within immediate range of my escape pod. Literally less than a minute from death, I spotted some nesting under a giant coral tube. Scooping it up, I paddled desperately back to the safety of my escape pod only to collapse from dehydration mere feet away from the fabricator with which I could have saved myself.

I think the third-best thing about Subnautica is how it balances weirdness with plausibility. Subnautica’s subaquatic paradise is not your usual survival setting by any means. The sea floor is as bounteous as it is beautiful, a kaleidoscopic paradise you could happily spend hours gawping at if it wasn’t for the minor issue of breathing. But it’s also incredibly dangerous to the neophyte survivor, not just because there are things with an offensive number of teeth lurking in the depth, but because your new home defies conventional survival game logic. There are no trees to punch down here, sonny Jim, and no freshwater rivers to sip from. If you want to stay alive down here, you need to be less Bear Grylls and more Bare Gills. Importantly, though, there is a logic to Subnautica’s survival, and it’s a very satisfying logic too. The first object you need to craft is an air-tank, because breathing, annoying as it may be, is quite important. After that, you need to find some food, which involves grabbing a few fish and cooking them with a big laser. Then you need to make water (by which I mean actually make water and not urinate; Subnautica isn’t THAT realistic).

Once you’ve done that, you can start the process of building tools and items to extend your survival. Some you can build straight away, using metal recovered from the wreckage of your crashed spaceship and mineral deposits on the ocean floor itself. For more advanced items, however, you need to scan the flora and fauna of Subnautica’s strange world, while also tracking down bits of machinery that fell out of your spacecraft as it plummeted to planetfall. For example, I quickly learned there’s an entirely different way to make drinking water in Subnautica: simply grab a bladder-fish and use its giant, distended gills to filter out impurities in the water. With Subnautica, you’re not just going through the usual survival motions, you’re actively learning how this world works and gradually turning it to your advantage. 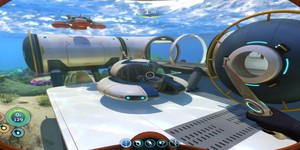 Rick braves the depths of Unknown World's aquatic survival sim, and discovers a pearl of a game lurking beneath the waves.