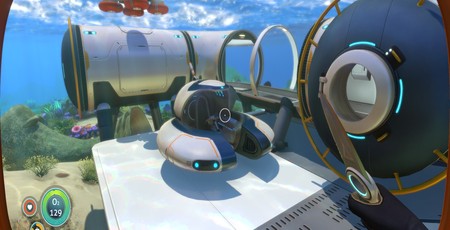 Subnautica stamps its unique identity upon the survival genre from the moment of its initial reveal. When you first clamber out of your life-pod, ejected from the doomed starship Aurora, you see no rolling plains that stretch tantalisingly to the horizon, or looming mountains that beckon with adventure. Instead there is nothing but a flat, uniform expanse of seawater. (And the smouldering wreckage of the aforementioned starship, but let's forget about that for the moment). It almost feels like a parody of other open-world game reveals, and this isn't the only way that Unknown Worlds' marvellous survival game subverts the player's expectations. Subnautica is, essentially, one giant underwater level, which by all rights should make it the worst thing ever. Instead, it's quite possibly the best survival game going.

Subnautica's basic mechanics are typical survival fare (at least in its vanilla mode), dropping you into its aquatic wilderness with nothing but a handful of basic resources. There are a couple of status meters to manage, primarily food and water, but also health and – if you're submerged – air. Your secondary concern is finding ways to explore and thrive in this watery wonderland, for which there are a host of more elaborate items to craft, structures and vehicles to build, and so on. Although the core of Subnautica may be familiar, the transition from a terrestrial to an oceanic setting has a dramatic effect on how these systems present themselves. Water, for example, is abundant, but none of it is drinkable by default, so that's one of the first challenges you need to overcome. Food seems equally plentiful, but because you're on an alien planet, you need to find out if a fish is edible before you turn it into sushi. And of course, all the while you have to watch your air supply, which also means keeping an eye on your distance to the surface and trying to remain oriented in Subnautica's vast, three-dimensional wilderness.

In other words, Subnautica has the player enjoying new ideas and encounters from the off rather than simply going through the same survival motions. But what also makes Subnautica stand out from other survival games is the sheer quality of its production. The underwater environments are absolutely beautiful, teeming with life and colour and variety. Each of its many biomes offers new animals, resources, and equipment to discover. From the coral reef-like idyll of the safe shallows to the verdant yet treacherous foliage of the kelp forests, every ridge and undulation of Subnautica's seabed conceals something new. Equally important, however, is that Subnautica feels wonderful to play. Crafting, for example, has a satisfying tactility to it, as you insert the ingredients into your fabricator and watch its lasers assemble the resulting object before your eyes. Even the basic act of swimming has a liberating elegance to it. The ability to freely move in four directions adds layers to both Subnautica's exploration and survival mechanics. Often you find yourself unconsciously delving deeper to probe at a new cave system or strip resources from a chunk of debris, then racing to the surface moments later as your suit warns you of your rapidly depleting oxygen.

Subnautica is also superbly balanced, both at a mechanical and tonal level. In survival mode, your basic needs are perfectly tuned, never letting you quite forget about them but also allowing you plenty of time to focus on other priorities. Resources, too, are generally well dispersed, although I find the randomised nature of what you find inside certain rock outcrops to be a little irritating. More impressive than this fine systemic tuning, however, is how Subnautica is capable of being both a supremely chilled out undersea adventure while also dripping with tension and atmosphere. Paddling around in Subnautica's shallows is a surprisingly serene experience, enabling you to experiment with the game's systems and new equipment in relative safety. Head into the kelp forests, however, and suddenly things become more serious, as you'll need to watch for the barracuda-like Stalker fish biting at your ankles. And in the farthest reaches of Subnautica's waters are creatures that make the Stalkers look like minnows.

I've seen Subnautica described elsewhere as a horror game, but this wasn't my experience at all. It undoubtedly has its share of sphincter-clenching moments, and the decision to remove all but a couple of small weapons from the game certainly makes encounters with predatory fish more intense than they might otherwise be. But for the most part Subnautica's tone is that of an adventure, and all good adventures involve peril at some point. This leads me onto perhaps my favourite aspect of Subnautica, which is how good it is at keeping you playing beyond the immediate challenge of learning how to survive. See, you're not necessarily the only survivor of the crash; from time to time you'll receive radio messages from other life-pods in the vicinity plus a few more cryptic communications from other sources. These little nuggets of plot give you reason to explore beyond the safety of the shallows, and the rewards they offer when you arrive encourage you to seek out more. On top of these are far larger nuggets of plot, revolving around the true nature of Subnautica's planet, plus the one that constantly billows smoke from the horizon. I don't want to spoil any of these, so let's just say the wreck of the Aurora is far more than a landmark for you to find your way around.

I should point out that Subnautica doesn't force you to investigate any of its mysteries. It's quite happy to let you explore of your own accord. Indeed, Subnautica's flexibility is yet another point in its favour. There are modes that cater toward more casual and hardcore experiences. The former of these removes the need to find food and water, while the latter introduces permadeath and realistic diving concerns like the effects of water pressure on your body (the vanilla mode simulates this to a certain extent too, but it's far easier to mitigate than in hardcore). While these options are welcome, I think the vanilla mode is so finely tuned, and such an engaging balance of free exploration and gentle story-based nudging, that it's probably the mode to shoot for. There are a few issues. Although Subnautica's story and codex entries are well-written (as they should be coming from Tom Jubert, who also penned The Swapper and co-wrote The Talos Principle), the voice acting is a little flat, which threatens to break the immersion. In addition, constructing bases, while simple enough in theory, can be a finicky process. The snap-to grid is highly selective about where you can place different base components, and the fact you can only carry a handful of resources at a time means a lot of to-ing and fro-ing.

These issues are hardly deal-breakers, however, and it's worth noting that perhaps my most significant issue with Subnautica previously – the rather stuttery terrain loading – appears to have been rectified. In a genre that went from non-existent to massively overcrowded within the space of three years, Subnautica stands out as one of the most accomplished survival games out there. Unknown Worlds takes its underwater concept and explores it from every possible angle, finding a perfect balance between accessibility and challenge, between laid-back exploration and the thrills and spills of adventure. 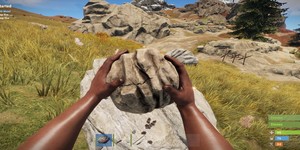