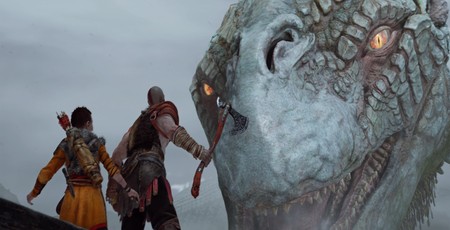 Video games as a medium have done a lot of growing up over the last few years.

We've stopped having to answer that annoying 'are games art?' question (spoilers: games can be art, but not all games are art) every time a game looks nice or actually says something meaningful, and we've managed to finally put trousers on Lara Croft. In the face of this progress, Kratos always felt a bit like a slightly awkward older relative. What the God of War franchise did well was fine: the punching, violence, and rage became a large part of adoring fans' reasons for enjoying the game. Meanwhile, we turned a blind eye to the quicktime event sex scenes, gratuitous nudity, and the fact that Kratos was a bit of a god of flaws.

So, when the news emerged that Kratos would be coming back to the big (or small, I don't know what size your television is) screen broke, as a writer there was some worry: Was Kratos going to dry-hump women in 4K now? Kratos already felt dated as a character; how would he fit in with recent hits like Uncharted 4 or Horizon: Zero Dawn, where heroes have a little more nuance than Kratos, who was an incredibly angry bald man, a Phil Mitchell for the PlayStation generation. The latest game in the franchise takes the bold move not of absolving Kratos of the misdeeds of his past, but of making Kratos himself aware of them. This new God of War, presented without subtitles or any additional numbering, adds depth to Kratos not by cleaning him up but by asking how a man that has taken part in his numerous misdeeds seeks to come to terms with them. What happens when a deeply flawed man realises the effect he's having on the world around him?

We're presented a world where Kratos has tried to make his peace and is now living in the middle of Norse mythology, living a simple life in the middle of Midgard. We join our once-angry hero as he collects the final log for his recently deceased wife's funeral pyre. Her final wish is for her ashes to be deposited on the highest peak in the nine realms, and that''s exactly what Kratos intends to do. Kratos' second marriage has had the impact of mellowing out the man, and his now famous Spartan Rage has calmed to a dour awkwardness, something that plays out most often in the game during his interactions with his son, Atreus. The relationship between the two is still in its infancy at the start of the game, and with many of the parental duties having been shouldered by Kratos' late wife Faye, Atreus seems unsure of exactly who his father is.

Atreus is a near-constant companion in the game, and it is his development and the deepening on the connection between him and his father that lends most of the meat to the game's narrative. Atreus is uncertain at the start of the game, desperate to impress Kratos while also slowly coming to terms with the death of his mother. Over time, he grows a voice of his own and becomes a formidable ally in his own right, able to translate languages and take out enemies on his own. Further on, he even starts to grow into his own man, struggling himself with the very same spark of fury that drives Kratos. He's the best reminder to Kratos of the sins that he's leaving behind. By failing to overcome his flaws, Kratos is teaching these negative lessons to his son, and that's the biggest impetus for him to change his ways.

You see this early when, after killing one huge troll, Atreus attacks the corpse with his knife, screaming in rage. It's clear Kratos is trying to teach the boy to weaponise his anger instead of letting it consume him, but Kratos has been so used to being swallowed up by his anger he just can't seem to get it through. The journey the two travel on from these opening moments is one of the most satisfying stories in recent video games and a fascinating tale of toxic masculinity and its effects. Atreus is naive and likeable, while Kratos is all guttural growls and grunts. It's a glorious example of how far we've come since teaming you up with an AI companion was essentially lumbering you with an escort quest.

One of the game's biggest joys is the Leviathan Axe that serves as Kratos's primary weapon for most of the adventure. Tossing the Leviathan Axe is incredibly satisfying, landing with a solid thud whether you embed it into an enemy or even just a wall. Hit an enemy or most objects, and the axe will freeze them, while a quick tap of the triangle button has the weapon tearing towards you, damaging enemies in your path and even tripping over anyone unfortunate enough to get hit in the legs. The Leviathan Axe is a huge part of combat now, and while you can mash buttons to get through a lot of the earlier fights, the mechanics are surprisingly tight; fighting smart is often the best method, using Atreus to stun or distract enemies while you bounce between targets, for example. After tossing his axe, Kratos will keep fighting with his bare fists and a whole new set of combos, dishing out stunning damage, which enables you to tear enemies limb from limb with instant-kill moves.

In a normal fight, you'll switch between your axe and fists often, while also parrying enemy attacks with your shield and a series of Runic special moves that can be equipped into different slots to give you powerful abilities. The combat is challenging, but it always feels relatively fair outside of a couple of difficult boss fights, and there's a fun drip-feed of upgrades and abilities that ensures it never gets stale. It also helps that your enemies take the forms of all manner of fantasy creatures. The game's first enemy are the Draugr (basically Viking zombies), which are probably some of the least interesting foes ever, but soon enough you're fighting flying Dark Elves, golems made of Stone, and even a few members of the Norse Pantheon.

It's a diverse bestiary; you're venturing between several different realms, so you're battering the denizens of many different fantastical settings. The art here is sublime, and this might be the best looking PlayStation 4 game I've ever seen. On the PS4 Pro, with the settings set to prioritise the resolution over the frame rate, the performance was smooth with a very rare hiccup - one or two moments of slowdown every few hours, usually during cutscenes - and it was absolutely stunning. The animation and texture work is gorgeous, but it's also just incredibly inventive with the way it treats its world. Norse mythology is particularly rich to mine for inspiration, but so many of the flourishes here are all down to Sony Santa Monica. God of War, without hyperbole, is one of the best games I've played this year. It's oozing with detail, and the performances of everyone involved is top-notch. God of War isn't genre defining, but only because its genre, that of a third-person action adventure, feels so far left behind that prestige television shows feel like a closer fit for the story and tone here. This could be a God of War TV show on HBO, and you would still binge it. Luckily, here you get a chance to cut people up with a giant axe at the same time - aren't you fortunate? 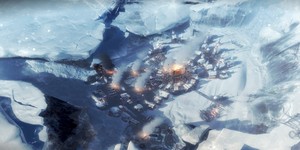