The seventh instalment in the God of War series follows gaming’s angriest protagonist, Kratos, as he attempts to sever ties with Ares, the scheming god who persuaded him to sell his soul before tricking him into killing his own family. In order to do this Kratos must track down and kill three Furies; these powerful deities' sole purpose is to punish anyone trying to wriggle out of inconvenient oaths made with the gods.

God of War: Ascension is a prequel to Sony’s flagship franchise, but only chronologically. It doesn’t really concern itself with Kratos’ development into the mass-murdering demigod we know today and by this stage in his colourful life he’s already no stranger to death and destruction. This is no origin story in the vein of Tomb Raider, complete with whimpering and remorse, it’s more of a ‘My First Greek Mythology-Inspired Killing Spree’ kind of affair. After all, the major character-defining point of Kratos’ life has already happened. Once you’ve accidentally killed your own family and had their ashes fused to your skin, things can’t really get much worse.

Like God of War III, Ascension’s opening level is one long set-piece. A fitting re-introduction to God of War’s kill things now, never ask questions approach to gameplay, the action kicks off in a prison carved into the flesh of a giant. As Kratos leaps, runs and slides around his surroundings sections of it come to life and attack, while the whole level shifts ands transforms around him. It’s an impressive start, but it lacks the wow-factor of the third game’s opening when we were seeing Kratos’ world in glorious HD for the first time. Having said that, there’s no denying this is one amazing looking game and while it may not look leagues better than its predecessor there are noticeable improvements to texture resolutions, character animations and framerate.

Smooth visuals are complemented by a hyperactive camera that does a great job of framing the action, injecting extra energy into already hectic sequences and making each boss encounter as dynamic as possible. Plenty of games have a kind of cinematic flair to them but usually at a sacrifice to player control, but despite a fondness for quick time events Ascension never falls into that trap. Even the QTEs have a bit more interactivity this time round, with the need to dodge incoming attacks with a well-timed flick of the analogue stick in between bouts of butchery. The fact that most QTEs end with gleeful graphic dismemberment, disembowelment or a combination of the two cements their position as fun additions to the game, rather than cheap cop-outs indicating a lack of imagination on the developers part.

For the most part, combat feels the same as God of War III with square used for a light attack and triangle for heavy, L1 to block and right stick to roll. Extra weapons such as swords, clubs and javelins can now be picked up and used with circle, while R1 tethers one of Kratos’ chains to an enemy leaving you free to attack with your remaining blade, hurl them at other enemies, or charge forward to deliver a bone-crunching shoulder barge. 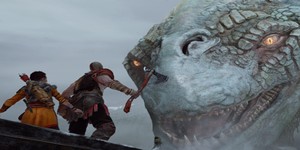 It's War in Ancient Greece, as Kratos leads the Titans into battle with the Gods of Mount Olympus. After such a long wait though, can Sony's continuing saga of Angry Greek Men really live up to expectation? We take a look to see if this is Sparta or Patrick.