There’s clearly years of thought behind the creation of Gunpoint, the first game from critic Tom Francis. It’s a result of deliberate choices informed by deep consideration about the successes of the medium, why games are important, what they can achieve and what they allow when you give players explicit systems but the freedom exploit to them.

Gunpoint is a stealth game, one that understands that making the player very physically weak is a positive, informing their necessity to think a lot more logically to overpower their enemies. It’s smart about how it conveys plot, how it characterises each member of the small cast through their choice of words, not to mention the varied tone you’re permitted in your replies. It’s a game that exists because a writer learned how to program, rather than the other way around.

As “Freelance Spy” Richard Conway the player gets embroiled in a web of capitalist greed and murder in a noir fashion, playing several sides against each other for his own advantage. Except it’s not very noir at all, it’s styled with this incredibly goofy tone that it establishes almost immediately. You’re thrown from a window after testing out a pair of trousers that allow you to leap short distances in seconds and never die from falling. Once arrived, you witness a murder and are promptly contracted to not only catch the killer, but remove any implication that you might have committed the crime yourself.

To play Gunpoint, you have to traverse a series of highly guarded facilities and usually hack a remote terminal to recover important data. If you’re seen by a guard they will shoot you within a split second. The incredible thing is even though they’re more physically capable, they’re outmatched by your skill and equipment. If played correctly, guards will even unknowingly become helpful participants in your heist.

The most important tool at your disposal is a machine that remotely rewires electrical circuits. You dip into a vision mode that allows you to see every connection made between objects in the building. If you were to turn off a lightswitch, then quickly disconnect it from the source, then you could get a guard to move away from their post to try and turn back on. The switch won’t work, so they’ll be fumbling around in darkness unable to see you at a distance and you can easily sneak past. 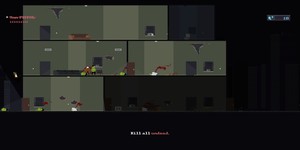 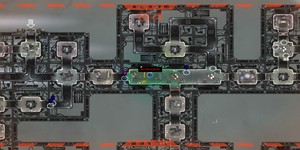 In space, no one can hear you scream