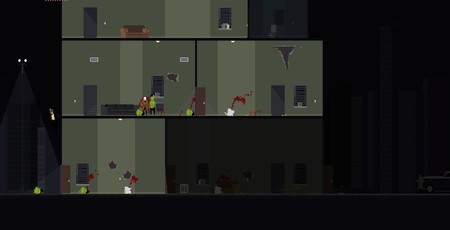 On the surface, Deadbolt is a mix of stealth and shooter with moments of skulking around in the dark punctuated with brutal gunfights. Play through a few levels, however, and the game reveals its secrets: It's a puzzler, but most of the puzzles that it offers are enemy combatants, and the best solution is to put them all in the ground with military-grade hardware. In Deadbolt, you play as the Grim Reaper. However, unlike the Grim Reaper of mythology, this guy is tooled up with serious firepower and fights room to room through nightclubs and tenements to put down a recent flood of undead. The Reaper dies in a single shot, and your undead targets are often significantly more durable, so you often find yourself needing to plan every engagement on the fly.

To help you, you have your firepower, the ability to take cover behind objects, popping out to put down aggressors while they reload. You can also teleport into vents and pipes, giving you the grim ability to come up the toilet below someone and gib foes instantly, painting the walls with gore as you emerge. Teleportation is also handy for quickly moving around the map, and it creates a number of tense moments as you charge to a vent to save yourself, bullets thudding into the ground around you as you disappear. The little systems make the game in a lot of ways, and the ability to do things like shoot out the bulb when you enter a room or in advance of an ambush creates lots of opportunities. You can also goad enemies into the darkness by turning off lights, which pushes them to turn the lights on again. This can be difficult to do when you drop a landmine between them and the light switch, scurrying away in the dark.

The AI isn't too smart in the game, but the enemies you fight are often challenging regardless due to their behaviour and mobility. Consequently, fights often involve a focus on positioning and accuracy - this was a little tough on the PS4 pad, even with auto-aiming, but with a mouse pulling off headshots should be simple. By the time you start fighting vampires in the clubs and bars they infest, succubi are charging at you with knives, while vampires fall from the ceiling to unload at you, and towering bouncers with sawn-off shotguns are brought back to life by immortality charms hidden around the level. It gets pretty wild, but that's part of what makes Deadbolt so unique.

Still, the game eases you into it. Deadbolt is quite gentle for your first set of missions, wherein you'll assault tenement blocks infested with zombies. You're fairly evenly matched with your starting .36 revolver, but after I picked up a tactical SMG with an attached laser sight and silencer, I was cutting a swathe through the levels without making a sound. Towards the end of the game it becomes incredibly difficult, with me groaning and yelping in equal measure from the sofa, 100 failed plans followed by the one perfect run that finally sees me emerge victorious.

The weapons you can buy all feel powerful: Shotguns, assault rifles, knives, and landmines all feature heavily in my plans now, but the arsenal you can pick out from the back of your car between missions is balanced by the fact that there is no reloading in the game. You fire guns till they're empty and then drop them or use them as impromptu melee weapons to try and beat down enemies as you search for something better. One issue is that the currency for buying weapons feels very thin on the ground. You get 10 to 15 souls for a level, while many of the exciting weapons cost over 100 to pick up. If you buy something you don't like much, it's going to be a long time before you can get something else, and for most players they won't be able to try out all of the weapons in a normal playthrough. This is a huge misstep, because every weapon handles differently, and the developers have put a lot of care into this entire arsenal.

So, mechanically the game is good, but what really pulls it together is the grungy atmosphere. The game's aesthetic is strong, and I'm a particularly big fan of the lighting. As mentioned, you can turn off and shoot out lights, but there are so many nice touches: The flickering lights in the vampire clubs capture the feeling of blasting through a club better than many video games I've seen before. Kick open a door and light floods into the dark room you've emerged from, and when you open your car's boot to take weapons out of it, a soft light bathes your character. Better, at the end of the level your car's headlights turn on brightly, telling you it's time to come home. However, if you've shot out or turned off every light between your location and the car already then it lights the place up brilliantly. Some levels send in additional enemies after you've cleared the first batch, and that becomes much harder when your traitorous car is lighting you up like a Christmas tree. Deadbolt is engaging, interesting, and the sort of indie game that should be championed in the industry. I adore it, despite the annoyance I've had with its difficulty and how sparse your 'buy weapons' currency is. This is a must-play if you've enjoyed games like Hotline Miami, but it's got a flavour all of its own that's sure to win it fans.