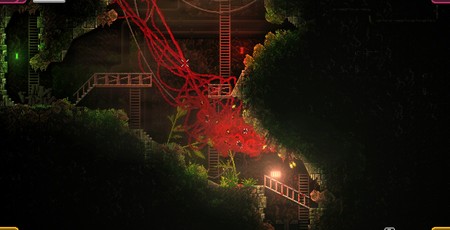 Placing you in the role of the thing from The Thing (or at least, an off-brand equivalent) Carrion is a reverse-horror experience wherein you smash out of a subterranean black-site research centre, chomping, slithering and metamorphosing your way through the site’s paltry defences in a grisly bid for freedom. Like John Carpenter’s legendary film, Carrion is short, nasty and perversely delightful. But in its enticing role reversal, Carrion also loses the key element that makes the Thing a masterpiece – tension – and it doesn’t do enough to fill the gaping wound that omission leaves behind. Initially, you won’t care about this too much. Carrion largely delivers on letting you assume the formless form of one of cinema’s most terrifying monsters. A seething morass of meat and mouths, Carrion’s creature design is as spellbinding as it is disgusting. You start out as little more than a row of teeth with some tentacles attached, but with each pesky human you consume, you grow, first into a writhing ball of sharp mince, and eventually into an unstoppable flesh train.

Indeed, the truly unsettling thing about Carrion’s monster is not so much how it looks, but how it moves. Carrion’s monster is basically the world’s most cursed mouse cursor, sweeping through caverns and corridors with simple click-and-drag controls. As it moves, tentacles lash out from the central mass, swinging its body across the level with dreadful ease. The speed at which Carrion’s creature moves is both thrilling and appalling, as is the way its body “settles” in different ways once you stop, rolling and slopping over itself like haunted cake batter. The sense of freedom is joyous and makes you feel truly unstoppable. Crucially though, you’re not. After a few minutes of letting you enjoy its monstrous power fantasy, Carrion begins to introduce enemies with weapons. Even a human armed with a lowly pistol can quickly shave your biomass down to nothing, while deeper into the game you’ll encounter enemies wielding machineguns and flamethrowers.

Consequently, you need to approach encounters with humans carefully, checking areas for ventilation ducts so you can ambush enemies from above or behind, or grabbing and throwing objects like computers or soda machines to stun humans before moving in for the kill. One of my favourite tricks is to wait behind a door, growl menacingly, and then smash it open when a human comes to investigate, propelling them against the far wall as I slop across the threshold to finish them off. At its best, Carrion reminded me of halcyon days playing Rebellion’s Alien versus Predator. There’s something terribly gratifying in watching a pixelated human cower before your horrific form, letting them sweat and shudder as you savour the moment before the kill. Should you chow down straight away, or pick with your food first, picking them up and tossing them around the room like some horrific mutant cat? The best monster games capture the dark joy of being that relentless killing machine, and Carrion achieves this too. It’s worth noting that Carrion looks and sounds great too, with fluid, crunchy pixel art and a soundtrack that offers similarly minimalist vibes to Ennio Morricone’s own score for the Thing.

When it isn’t about terrorising miniature humans, however, Carrion is less impressive. The broad structure of Carrion is typically Metroid, with you gradually opening-up new areas of the base as you pick up new abilities. These include a web-spitting power that lets you push switches at a distance and the ability to swim through small cracks underwater by transforming into a cluster of worms. Some of these powers are only available when your creature is a specific size, so you often need to locate biological pools where you can dump excess biomass, adding a puzzling element to your monstrous mutations. All of this works well enough, and I was impressed by how effectively I could navigate the game’s semi-open levels with the minimal prompting the game provides. But it also isn’t really what I want from a game about being a terrifying monster. What I want is new ways to kill and to dominate. These abilities provide that to a certain extent (a late game power that lets you take direct control of enemies is particularly satisfying) but it isn’t enough.

By placing the emphasis of the game on the monster rather than the human, Carrion inevitably loses the central aspect of the Thing that makes it such an iconic horror film – the inability to trust the people around you. Despite having seen the Thing at least ten times, its structure is so well crafted that I can never remember who is the Thing and who isn’t. Here, we know exactly who the monster is. It’s us! To make up for the loss of that extra layer, Carrion needs to provide a rich and dynamic monster experience. You want to feel the cascade effect of your presence, the panic and the terror that your havoc engenders in the inhabitants of the base. You see this in the environment – as you move you coat the levels with a slimy residue, while save points involve depositing biomass in a way that often drastically alters the surrounding area in the process. But these are fixed, scripted events. You’ll never see humans accidentally shooting one another in panic, or tumbling off a gantry as they attempt to escape your approach.

Part of the problem is that individual areas are quite small, so the opportunity for more dynamic events or approaching combat challenges in different ways is limited. I think Carrion would benefit from having larger spaces where the focus was less on navigational challenges and more on eliminating your opponents. It upscales the challenge later in the game, introducing enemies with energy shields and combat mechs. Again though, the areas these encounters take place are relatively cramped, so the options available to you are limited. For a little over a tenner, Carrion provides a solid few hours of B-movie thrills, but despite and excellently-designed monster, the structure of the game doesn’t quite give it enough room to thrive.