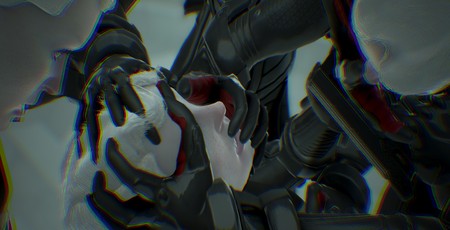 Echo tells the story of a young woman named En, a roguish mercenary type who, after travelling through space for 100 years, arrives at a remote and frosty planet that barely registers on any galactic map. The planet is covered by a gigantic, ancient structure left behind by some long-dead civilisation, a palace of incomprehensible size and grandeur. Here, En hopes to find a piece of technology that will resurrect a person she knew called Foster. But when she activates the power supply, the palace's corrupted systems turn hostile, and En is forced to fight her way out. Echo's key feature is that the palace uses your own movements and abilities against you. The opponents En faces as she traverses through the palace are clones of herself. At first, these clones are little more than zombies, shambling toward En and clutching at her with their hands. But the palace is constantly recording En's actions, observing when she sprints, sneaks, or uses her weapon.

When the recording devices reaches a certain critical threshold, the systems reboot, casting the palace's golden halls and filigree columns into darkness. When the lights flicker back on, the clones can now do anything En did before the previous reboot. If she opened a door, they can open doors. If she vaulted over a railing, they can vault over railings. If she shot a clone dead, they can shoot her dead. Obviously, you don't want to be stuck in a room with a bunch of gun-toting clones, but when a half-dozen of them are about to tear you limb from limb, there isn't much of an alternative. Thus the central tension in Echo stems from the need to use certain abilities now, with the possibility that this will cause you bigger problems further down the line.

The game itself is structured like a diet Hitman or Splinter Cell. En is able to use a combination of stealth and firepower to traverse large rooms filled with patrolling clones. She can dispatch them quietly from behind, push them over while running, and of course shoot them if things get hairy. If a clone spots En, they will chase her, and continue to do so until either killed, stunned, or rebooted. It's a neat mechanic, but more important than that is it's a well-balanced mechanic. Although the clones learn from you, they don't get smarter and smarter until they're next to omnipotent. They only learn the moves you performed before the previous reboot. When said reboot occurs, their memories are wiped and implanted with an entirely new set of abilities. So if you shot several clones before one reboot and don't shoot any prior to the next, they will unlearn that skill, replacing it with opening doors or sneaking.

What results is a constant battle of adaptation, where you need to think tactically about what strategy you will employ to cross a current room, while also considering how that might affect the next obstacle you need to overcome. An early example sees En sneaking around rooms that are partitioned by doors, and interspersed with knee-deep pools of water. The clones won't cross water or open doors until you do it, so the smart play is to stay in the water as long as you can before one reboot then switch to using doors when the system resets. There's also a brief period between the lights going out and the system rebooting where the palace isn't recording your moves, and you're free to act as you please. These are good moments to try to make as much progress as possible, blasting anything that gets in your way. The downside is that it's hard to see what's in front of you in darkness, and you could find yourself in a heap of trouble when the lights go back on. Again, there's a central tension here which is very gratifying. Echo isn't really a horror game, but there are moments when it dips one foot in that black and oily genre.

I like the concept of Echo, and the story isn't bad either, offering us a glimpse of a sci-fi universe and lending a tantalising sense of the galaxy beyond in a few lines of dialogue. Ultra Ultra has also hired some prime voice-acting talent to bolster their tale, casting Rose Leslie as En and Nick Boulton as her AI companion. Both do a sterling job of adding verve to the script, although the relationship between the two feels artificially antagonistic, and some references to off-screen events are a little too obscure. At a production and systems level, Echo gets an A* from this examiner. Unfortunately, it's wrapped in a structure that is formatted to death; Echo's feedback loop is tiny. There are about three different objectives that Echo constantly recycles over its brief running time. One sees you collecting sceptre-like keys from around a room to unlock a door, while another involves collecting glowing orbs off pedestals to unlock an elevator. These objectives are repeated over and over to the point where the game becomes crushingly repetitive, despite only being a few hours long.

What doesn't help is that the Versailles-like environments the game takes place in, while impressive at first, quickly turn monotonous, with only mild variations in colour and decoration. In addition, Echo uses a needless checkpoint save system that only serves to heighten the sense of repetition. The biggest problem, however, is that En's abilities are fairly limited, which means the same is true of the clones' ability to learn and adapt. Indeed, throughout my time playing Echo, I found my mind wandering to the subject of another game. Metal Gear Solid V utilises a similar mechanic where guards will adapt to your playstyle on a mission-to-mission basis. If you spend a lot of time sniping them, they'll equip helmets; if you deploy gas-grenades, they'll start wearing gas masks. It's a much broader and more inventive interpretation of the concept presented in a much subtler and more organic fashion.

Obviously, Kojima Productions had far more resources to call on than Ultra Ultra did when making their respective games, so you might argue it's an unfair comparison. But that didn't help the overriding feeling I had that I'd seen this idea executed considerably better elsewhere. The scope of Echo is simply too narrow and its structure too formulaic to really capitalise on its playful mechanics.