There comes a point in Blacklist when you realise Sam Fisher is one angry man. It may be when he responds to a friend saving his life by kicking them out of his team, or when he tortures a Guantanamo Bay prisoner with a folding chair, or just when he's grimacing at the "Launch Mission" button that appears whenever you opt into a new campaign level, looking as if his eyes might explode out of his skull at any moment due to the sheer quantity of pent-up rage trapped behind them. It wasn't always like this. About eight years ago when unravelling conspiracies in Chaos Theory, Fisher was your friendly neighbourhood spy[der] man. Sure, he was always a little world weary, but he was also cool and collected, and had a wicked sense of humour, never short of a James Bond-style quip. He was a pleasant-seeming fellow despite his line of work.

Even when he was holding a knife to the throat of some South American Drug Lord, tugging on their twisted arm to "extract" information, you couldn't help but feel like he was somehow being nice about it. Then Sam spent a period as a Double Agent, which was pretty disastrous for everyone involved in the Splinter Cell series. Since then he's become cold rather than cool, a lumbering sack of casual violence which typifies the Hollywood portrayal of the 21st century spy. The guy has a pet drone, for goodness sake. Click to enlarge
Sam's character typifies Blacklist's tone, all soulless military techno-babble and morally dubious unpleasantness, taken to the point where the one humorous character present in the game serves only to infuriate, his wisecracks lightening the mood about as effectively as a fart at a funeral. Strangely, however, it does not epitomise the experience of playing the game, which is fun despite the grim facade, and the closest Splinter Cell has come to recapturing the brilliance of Chaos Theory. It successfully combines the shadowy sleuthing of classic Splinter Cell with the cover and close-combat from Conviction. Make no mistake, Blacklist is a good game, it's just not a very nice one.

The Blacklist is a series of threatened attacks against the US arranged by a terrorist cell known as the Engineers. These mechanically-themed doom-bringers announce the date of their attacks, but not their location or the form they will take. In response to this threat, the US President gives Fisher his own counter-terrorism unit known as Fourth Echelon, a plane called the Paladin from which Fourth Echelon can strike , and something called Fifth Freedom that means he can torture, brutalise and kill pretty much anyone he wants without repercussions, because America. If Sam had a favourite Christmas Carol, it would be "Jingo Bells." Click to enlarge
The plane serves as your base of operations for everything: the singleplayer campaign, side missions that can be played alone or cooperatively, multiplayer "Spies vs Mercs", equipment upgrades, or just as a place for Sam to wander around shouting at his friends and looking moodily at things. It's clearly emulating Mass Effect's Normandy, but lacks characters worth talking to for any reason other than to give Sam something to vent at. It's basically a menu you can walk around, and because of that is less efficient than that traditional method of navigation.

Nevertheless, it just about works as a way of tying the game's content together, and in that regard Blacklist is generous in its offerings. The single-player alone is a meaty thing, a globetrotting adventure that takes you from typical Splinter Cell holiday destinations such as sand-blasted terrorist camps and the fortified house of a Brazilian arms dealer, to more novel locales including sightseeing over the rooftops of a rain-soaked London and breaking into the headquarters of an Iranian Special Forces unit. 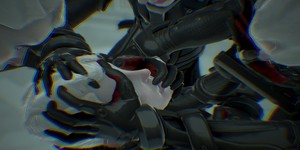