You can block out the horror of it all , the tragedy of it all, for a time by tuning into one of the various radio signals that seep into the Commonwealth like mould growing over a corpse, and continue your wandering to the tune of the Five Stars' "Atom Bomb Baby," or the Ink Spots' "Whispering Grass," But even in its brightest moments, that oppressive, isolating atmosphere never fully dissipates. And in certain areas, such as the Glowing Sea, it becomes literally overwhelming. The good news is, you rarely have to brave this hostile and foreboding world alone. One of the most persistent changes from previous Bethesda games is the emphasis on companions. You encounter your first, Dogmeat, within the first hour of leaving the Vault, and there are many more scattered throughout the world, waiting to accompany you on your adventures. Sticking with Dogmeat, however, his role as a companion is considerably more involved than before. While exploring the wasteland, he'll sniff out items of interest and warn you of nearby enemies, while in combat he'll pin down enemies, stopping them from attacking you and giving you a nice easy shot to take in V.A.T.S.

Unfortunately, the emphasis on companions is a mixed blessing, as Bethesda haven't adjusted the game's framework sufficiently to accommodate them. For the most part they do a decent job of navigating the world's geometry, but given its sheer complexity they inevitably get stuck from time to time, particularly in the more cramped interiors, where they can be as much a hindrance as a help during combat. There's also no way to easily switch companions in and out, meaning if you want to change Dogmeat for somebody else, you have to seek them out, which can be a nightmare if you forgot where you last sent them. This is Fallout 4's overriding problem, it is constantly struggling to thrive against the architecture which Bethesda have been using for years. Combat is another example. Bethesda has clearly done a lot of work to improve the combat over Fallout 3. Weapon and enemy animations are both much improved, and generally it's faster and fiercer. Larger enemies such as Deathclaws and Yao Guai are respectfully rare, but absolutely terrifying when they appear.

Yet although it has the look of an FPS, the combat mechanics are still based in RPG stats. This makes it brutally punishing at first. I died dozens of times in the first ten hours of play, often without knowing what had caused my stunningly abrupt demise. Explosive weapons are devastatingly powerful, if a Raider chucks a grenade in your direction, you might as well press quickload and save yourself some embarrassment. Some of the pain is negated by the ever-wonderful V.A.T.S system, which lets you target specific areas of an opponent's body, adding a slightly more strategic element to the combat. When you're facing a tough enemy, however, the best tactic is usually to back-pedal furiously while spamming whichever weapon you have the most ammo for. There's also an awful lot of combat. Almost every mission involves massacring something, be it mirelurks or mercenaries. Dialogue-based resolutions to conflict are comparatively few and far between, while stealth is only useful for gaining a cheeky damage bonus with your first shot before all hell breaks loose for the millionth time. 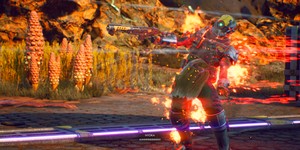 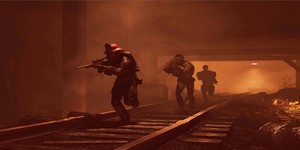 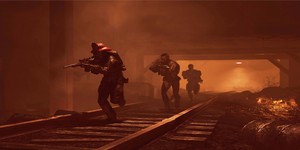