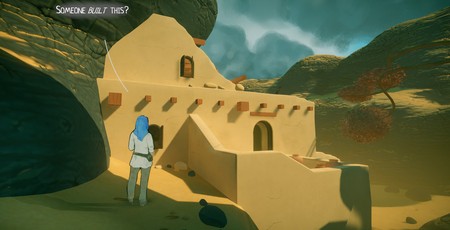 Heaven’s Vault is the latest game from Inkle Studios, that which quietly reinvented the text adventure with its remarkable interactive travelogue 80 Days. In many ways, Heaven’s Vault is similarly reinventive, a text adventure that is so grand and ambitious that you’d be forgiven if you barely recognised the game’s branching-narrative heritage. This is a game with full 3D environments, characters who walk around and talk to you, a unique language translation system, and even a fully explorable open world. There’s a lot to celebrate here. Yet despite the admirable amount of work Inkle has done, I ultimately feel Heaven’s Vault is slightly less than the sum of its parts. The abundance of choice Heaven’s Vault offers comes at the cost of consistency of tone, while some of the newer elements Inkle experiments with simply aren’t fun to play.

Heaven’s Vault casts you in the role of Aliya, an archaeologist who lives on the moon of Iox, hidden inside a stellar nebula somewhere in the far reaches of space. Aliya is tasked by her superiors with tracking down an Ioxian roboticist called Renba, who disappeared somewhere in the Nebula. This spark propels her on a much grander journey which delves into both the ancient past and the potential future of the nebula. It’s worth dwelling a moment on the world-building, because the setting of Heaven’s Vault is beautifully strange, unlike anything I’ve encountered in a game before. The nebula is home to dozens of settlements living on tiny shards of rock. These communities are connected by a network of space-rivers: flows of ice, gas, and dust that travellers sail upon using rickety wooden spaceships. It’s a rich and diverse ecosystem, home to sand-blown desert worlds, Marrakech-like market towns, towering citadels, and idyllic water-gardens.

It’s also a place for which Inkle has constructed a deep and complex history. As an archaeologist you spend much of your time investigating ancient ruins, digging into the lost past of the nebula’s various civilisations. At the core of this is an entire language system that you must decipher, a complex screed of vaguely Aramaic symbols known as Ancient and inscribed on many of the artefacts you uncover in your explorations. Translating this language forms the main mechanical interaction of the game. At the outset Aliya is essentially illiterate in Ancient. But each inscription you discover offers new opportunities to learn, which you do through a mixture of logical deduction and educated guesswork. For each unknown word of any given inscription, the game highlights several potential options, and there are various ways to deduce the right answer.

Sometimes you can fill in the gaps by looking at the symbols themselves, which cleverly straddle alphabetical and object-oriented representation. The Ancient word for 'water' for example, includes a symbol that looks like a wave. But that symbol also appears in many words related to movement. You can also make deductions by examining the structure of the sentence or phrase, or the relationship between the inscription and the object it is inscribed on. If the object is a telescope, for example, there’s a reasonable chance the inscriptions will have something to do with seeing things. It’s a fantastic system, and Heaven’s Vault is by far at its strongest when you’re knee-deep in dust, poking around some ancient structure for artefacts to decipher. Much of the time the game is infused with an emboldening spirit of adventure. In fact, I often found myself thinking of BioWare’s Knights of the Old Republic as a comparison point. Both games have a similar vibe in terms of tone, and in the act of uncovering a grand and ancient sci-fi mystery.

A shame, then, that Heaven’s Vault so regularly gets in the way of what it’s good at. Travelling from place to place, for example, involves physically sailing between them on the space rivers. At first this is innocuous enough. The sailing mechanics are incredibly simple, but the journeys are short enough that it makes for a rather peaceful change of pace between exploring planets. Later on, however, these journeys become tediously long, and no amount of incidental conversation between Aliya and her robot companion Six can mask the fact that the sailing is plain dull. What doesn’t help is that, after a jolly old time exploring in the opening act, the game starts hassling you to repeatedly backtrack to key locations for story reasons. There is, mercifully, a limited fast-travel that helps cut back on the sailing, but you still have to trek through the actual locations to get where you need, which on the moon of Elboreth is particularly monotonous. The backtracking hinders the flow of your adventure as you're forced to constantly return to Iox just because your superior wants to have a word.

Finally, while the world-building is thoroughly excellent, the actual writing can be tonally inconsistent. This is especially the case with your main character, Aliyah. The problem is Heaven’s Vault can’t seem to decide whether it wants the player to have influence over her personality or not. By default, Aliyah is quite, well, unpleasant, with a chip on her shoulder and a penchant for being condescending and often outright rude. If that’s the character Inkle wants to portray, fair enough (although, frankly, I think her rather cold exterior isn’t well-fitted for the game’s adventurous spirit). Then there are dialogue choices which seem on the surface to let you play her in a nicer way. Yet those choices often lead her to say things that don’t sound anything like what you initially chose, a problem perhaps most associated with Team Bondi’s L.A. Noire.

Part of the problem is that the sheer number of choices available (trust me, there are loads) inevitably impact the consistency of characters and character relationships. I also think the lack of voice acting for most of the script makes it difficult to get a proper read on characters. Line-by-line the script is very good, sharp, intelligent, and gently witty. Nonetheless, I think having a proper actor to voice it would have helped iron out some of the inconsistencies. Ultimately, the main issue with Heaven’s Vault is that it’s simply too big to rely on narrative trees to make all its systems work. It needs some proper quality-of-life mechanics, like an independent inventory system and more depth to the sailing. There’s still a great adventure buried within Heaven’s Vault, but you’re going to have to do some digging to get to it. This globetrotting adventure is one of the finest examples of interactive fiction going.

Celebrating a decade of the best Star Wars game ever made.