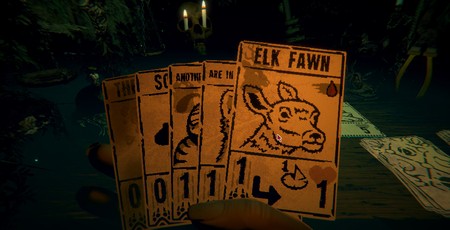 It's rare that a game grabs your attention from the starting menu, but then again, Inscryption is a rare game in so many regards. Boot up Inscryption for the first time, and after sitting through a faux-loading screen, your right index finger will be briefly baffled as you tap fruitlessly on the "New Game" button. 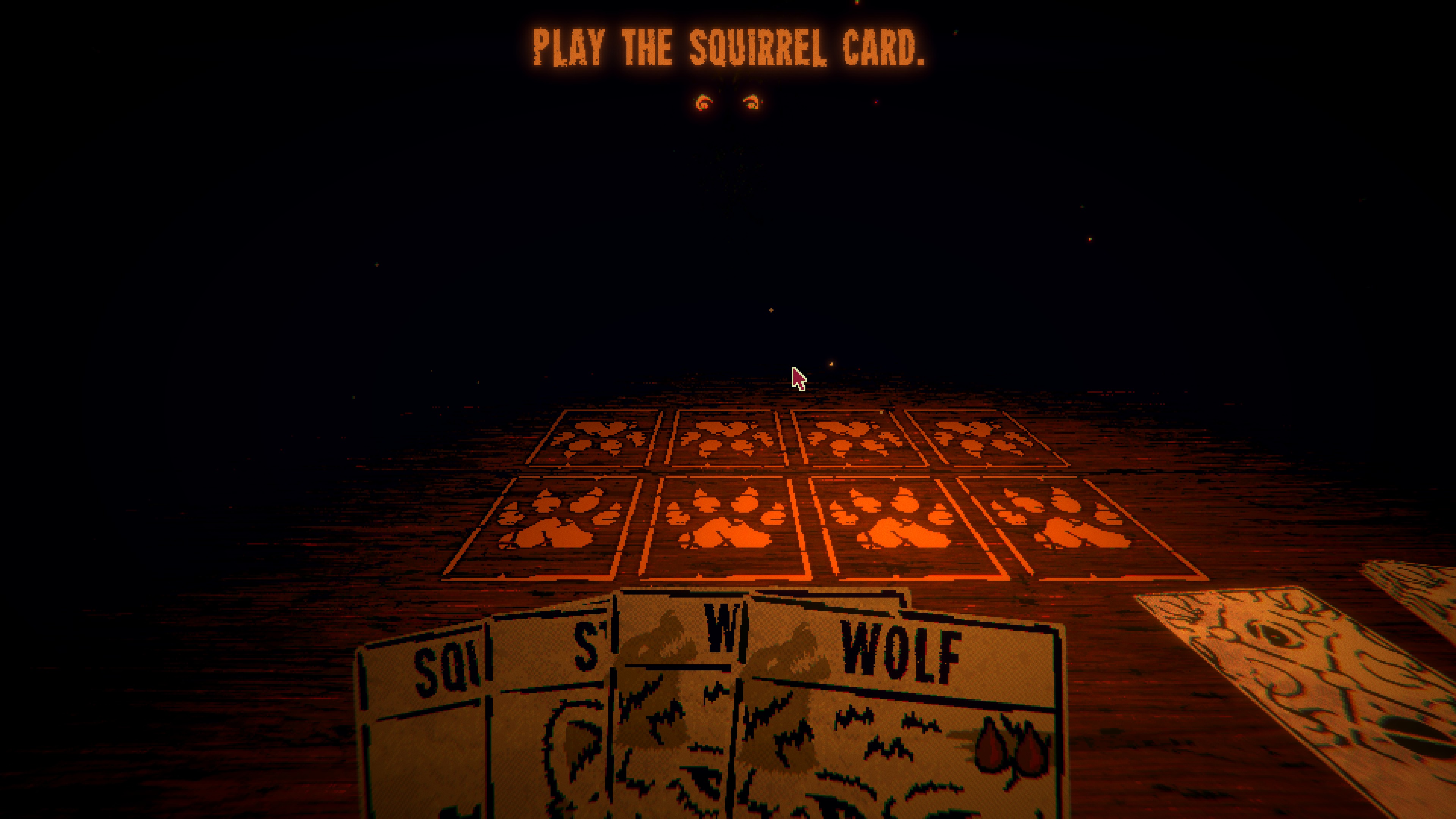 That's because there are no new games in Inscryption. There is only the game. The one about bones and blood and ritual sacrifice. The one played against blinking eyes and withered hands that tap impatiently on the table and sometimes do…other things. Instead, you must press continue, because you've already been playing for some time, and continuing is all you can do. The alternatives don't bear thinking about.

Let us, then, continue. You sit on a stool in some backwoods shack, a fan of cards clutched in your trembling hand. Each card depicts a woodland animal. Across the table is a figure wreathed in shadow, who talks in a soul-shaking buzz, like Lucifer's fridge. Between you is a board on which cards are played. Guests always commence the turn, so you may play a squirrel. The squirrel is good for nothing, save as an offering for your next card. Sacrifice the squirrel, and use the blood to play the stoat. The stoat will talk to you, tell you play along. Listen to the stoat. 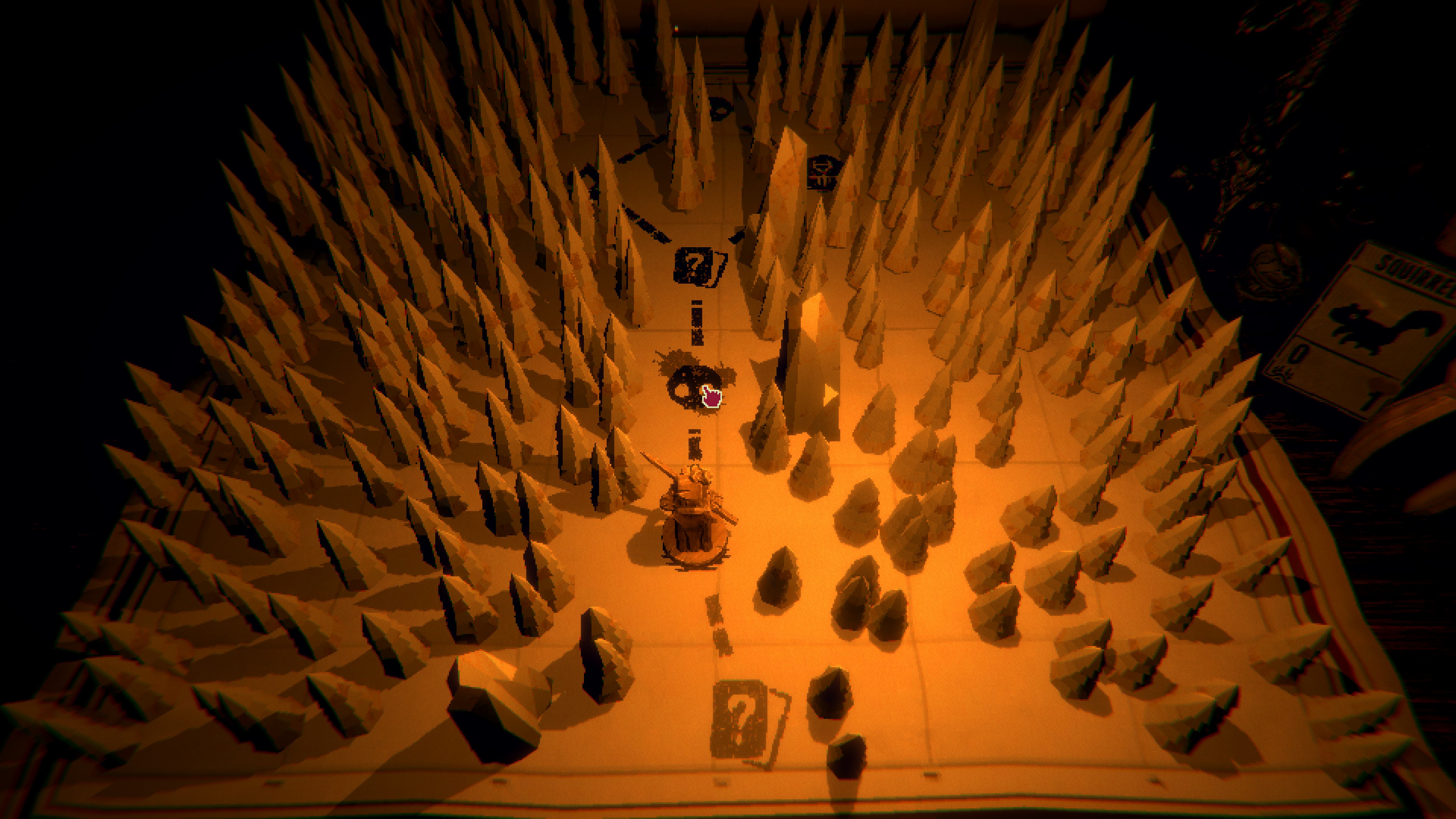 You're now out of moves, so ring the bell. The turn will resolve and play will return to you. For this new turn you may draw one card, either from your hand, or from a deck of squirrels. Draw a squirrel and place it on the board. Now sacrifice the squirrel and stoat (who will protest) and use the two blood tokens you receive to play the Wolf.

Resolve the turn again. The Wolf will attack, either at an animal played in front of it, or if there is no animal, directly at your opponent, whereupon it will deal damage. The damage is counted on a set of scales, which will rebalance as damage is exchanged. Deal enough damage to your opponent over your own damage level, and you will win, and may progress. If you lose, well, let's not dwell on what happens if you lose. You'll find out in due course. 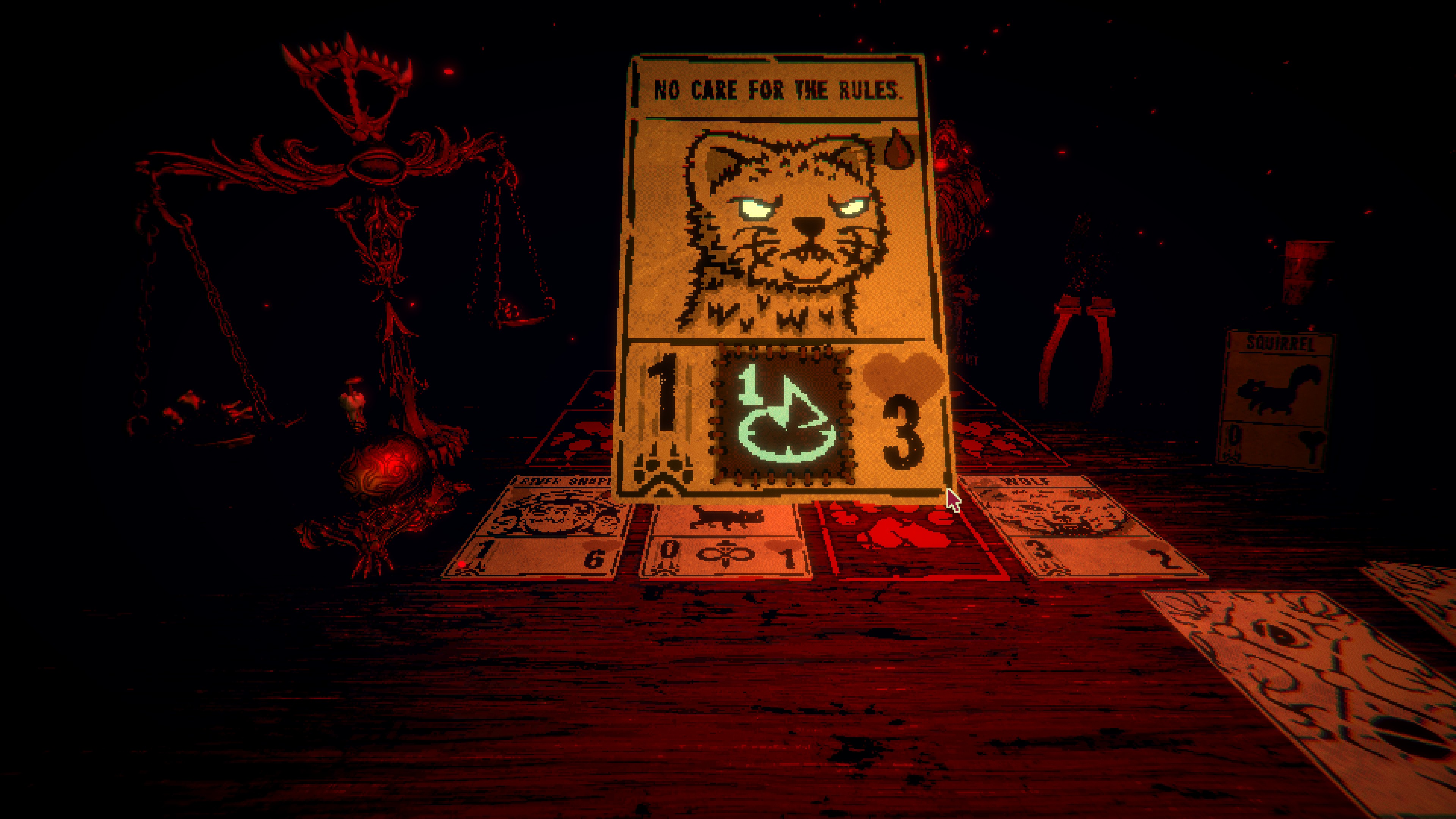 Was that a lot to take in? That's alright. Feel free to take a break. Yes, you can get up from the table, so long as you're not in the middle of a match. Stretch your legs, have a look around the cabin. Admire the crunchy pixels of the room's many objects. Fiddle with the safe in the corner. Move the hands of the cuckoo clock behind you. Leaf through the rulebook to better learn the cards in your hand. Didn't the stoat say something about the rulebook? That it might somehow help you escape this room?

Why not sit back down while you think about it? Move your figurine to the next point of the map. You might get an opportunity to gain some new cards, like the ant, whose damage stacks for every ant you have in play, or the adder, whose venomous bite will instantly kill any animal in front of it. Or you might come across some much-needed supplies that provide you with one-off equipment, like squirrels in a bottle you can add to your hand at any time, or a pair of scissors you can use to cut up one of your opponent's cards. 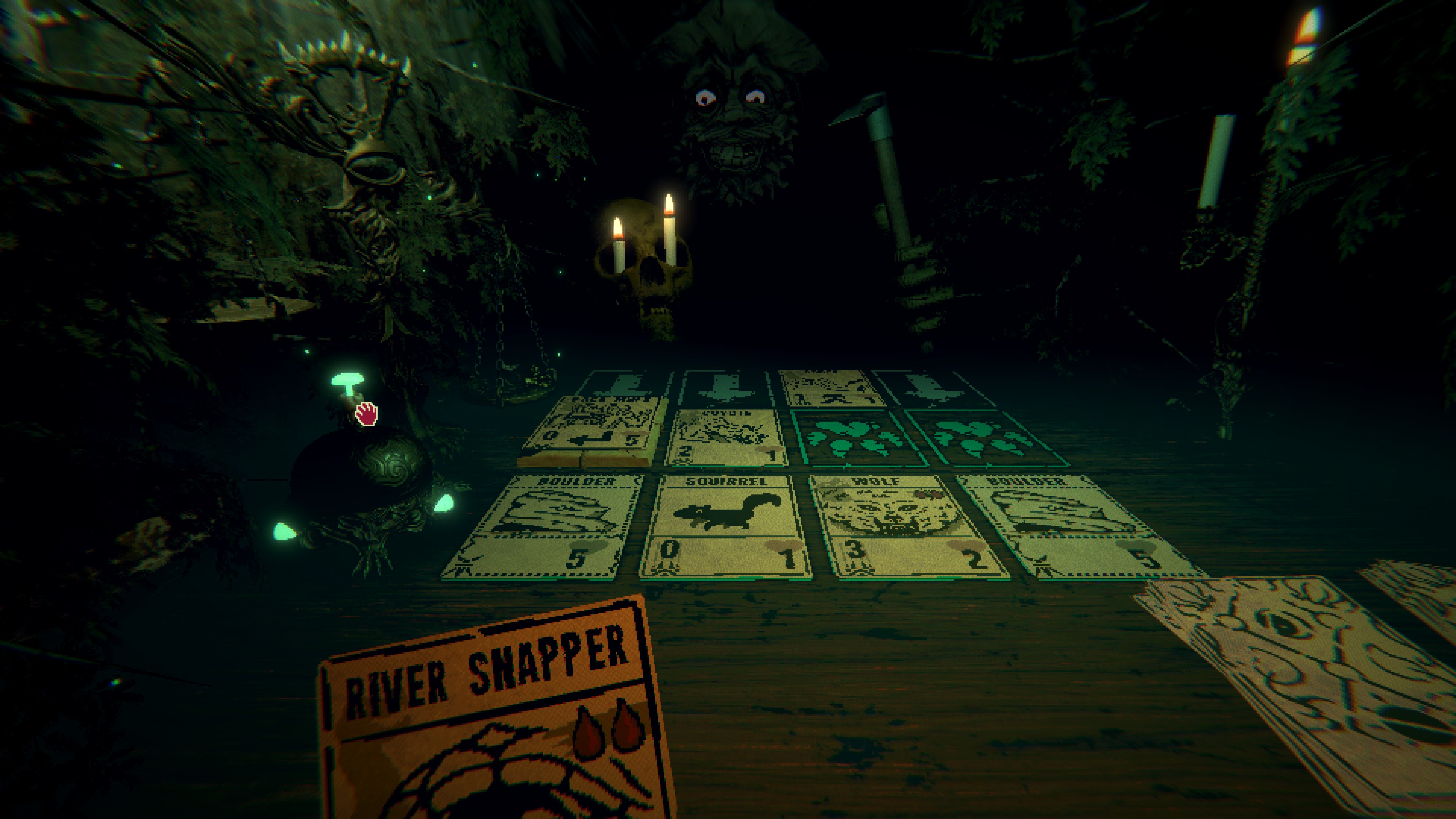 Make it through enough battles, and your opponent will reveal one of his myriad personalities. These special encounters will see you take on foes like the Prospector, who can turn your cards into useless lumps of gold. Getting through these battles will test your deck-handling skills to the limit. But you should feel good about you progress. Few ever make it this far.

Victory in these encounters may taste sweet. But the flavour is fleeting. We're not done yet, not even close. There's much more for you to discover. Perhaps you prefer to build you army from bones, an alternate type of resource that increases whenever one of your animals is killed. Or maybe you'll make use of the stone altars found throughout the wilderness, sacrificing one animal to give its power to another. Or perhaps you'll become a pelt dealer, gathering these inert cards from the trapper, and facing your opponent with a deck full of useless skins until you can sell them to the Trader for extra-powerful cards. 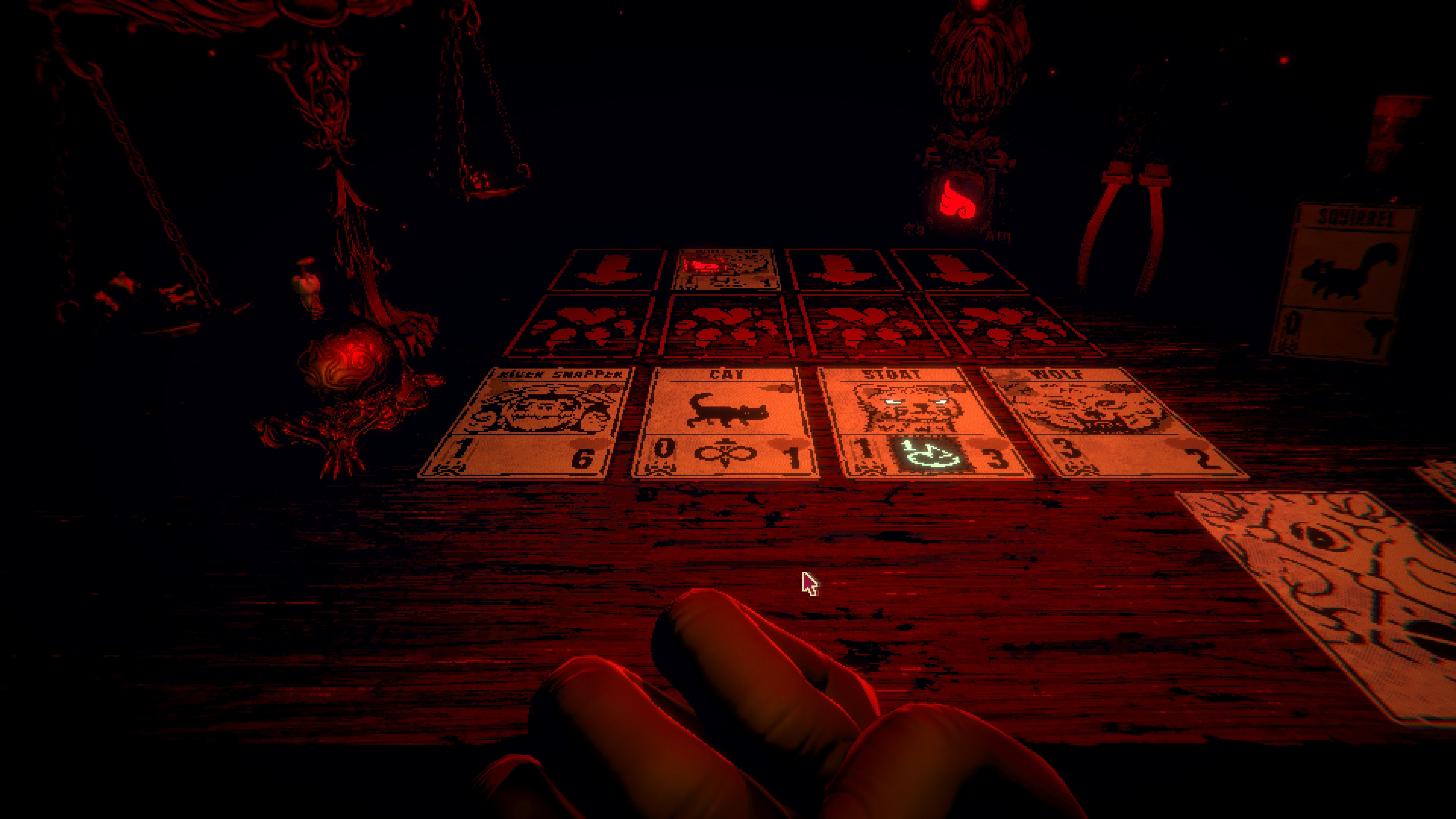 Down and down the rabbit hole goes, it's warren spreading out from the board into the cabin itself. The two are inextricably linked, you see. The board will lead you to clues in the world, which will lead you to more powerful cards, which lead you back to the board. With every new clue your power increases, to the point where you can create unstoppable cards that verge on game breaking. Indeed, if there is an oversight on your opponent's part, it's that he puts too much potential power in your hand, the game running away from him once you pass a certain point.

But you don't mind too much, do you? Admit it, you like it here. You like those blinking eyes across the table. You like the dreadful atmosphere, the palpable threat of consequences if you lose. You like the feel of the blood and the bones as they slide through your fingertips, the cards that chatter and argue and complain as you play them. You find it thrilling, perhaps even a little amusing. Your hands, they don't shake through fear, but through excitement. 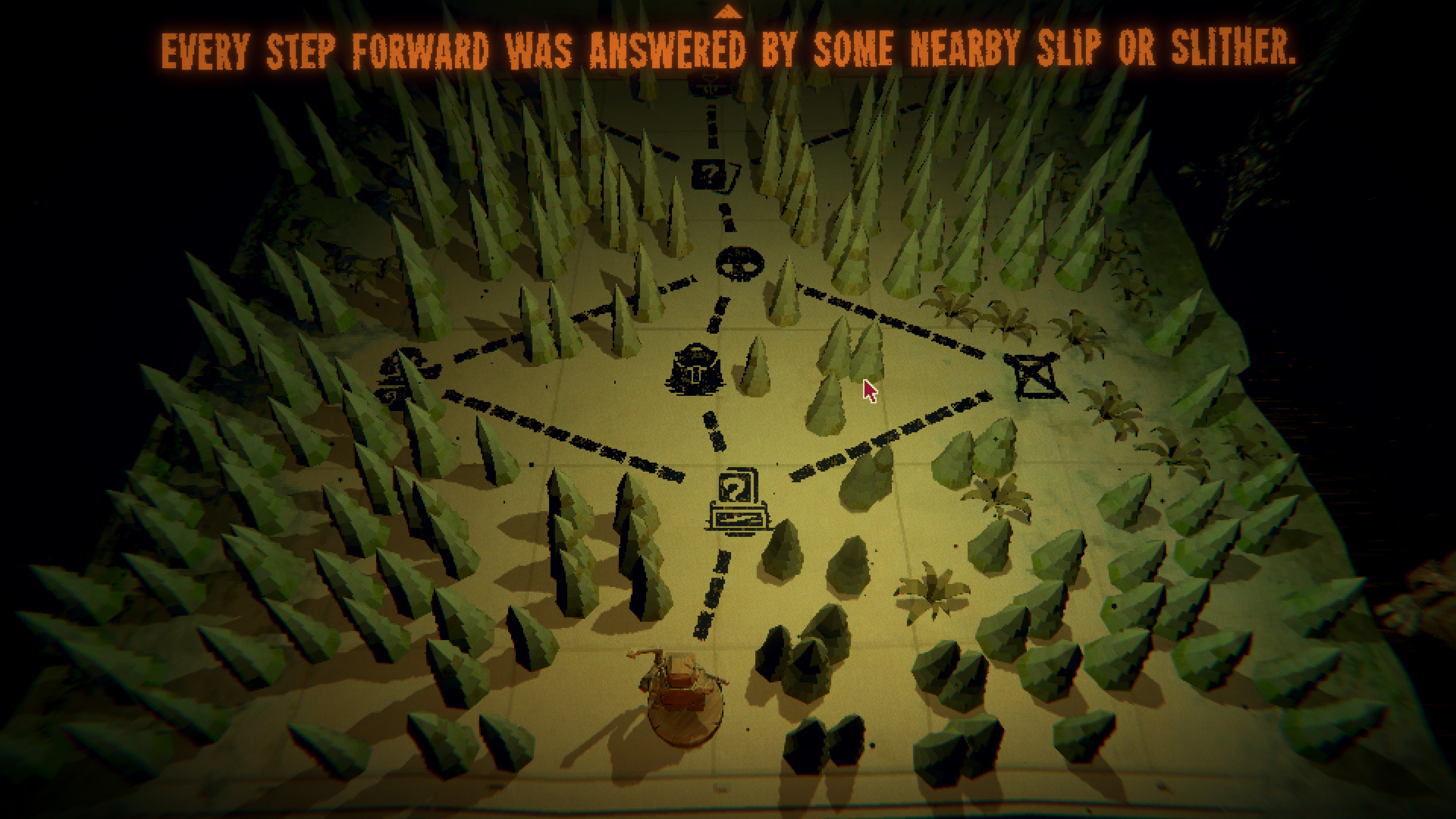 So why not pull up your stool, and have another round of this twisted little game? Bask in its dark tones and delve into its deep and ever-shifting decks. I'll be there with you, lurking in the darkness. There is, after all, nothing else quite like it.