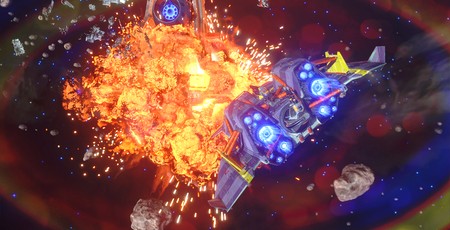 On the face of it, Rebel Galaxy Outlaw is a space game for people like me. It’s part distillation and part throwback, whose closest interstellar relative is 2003’s Freelancer. It’s a space game that does everything it can to strip away any excess mass and get to the point. Unfortunately, Outlaw arguably strips away a little too much, resulting in a space sim which, while refreshingly to the point, also feels just a tad shallow.

Outlaw places you in the dust-caked boots of Juno Markev, a former virtuoso space-jockey who is forced back into the game after the murder of her husband. The game commences with a slick introductory cutscene in which Markev narrowly misses her target, wrecking her ship in the process. With no craft to fly and no cash to buy one, Markev is forced to start from the bottom, working her way up the slippery and treacherous ranks of the space-simulation pilot. So begins a long and twisting revenge tale that sees you explore 40 different star systems, closing shady deals in backroom bars and making fragile alliances with galaxy-spanning corporations. Like much else in Outlaw, it isn’t the most original piece of work, but it does enough to keep you engaged in between trade runs and fighting space pirates.

Aiding the story is Outlaw’s sense of style. Far from the gleaming chrome of Elite Dangerous or the pulpy vibe of No Man’s Sky, Outlaw’s universe is one coated in a thick layer of dust and axle grease. Everyone in its world speaks with a deep-south drawl and prefers jeans and a jacket to a sleek spacesuit. Meanwhile, the systems and space stations of the game’s cluster are named after US states and cities anywhere south of D.C. It’s a world with a powerful lived-in vibe to it. I would say that it’s the ultimate space trucker fantasy, only Outlaw appears to have little interest in space trucking. To progress through the story, you’re going to need to upgrade (and ultimately replace) your starting rust-bucket, which means taking on side-missions to accrue the cash. These missions are largely familiar flavours of space-sim. You can take on sector patrols, pirate raids, and, of course, delivery runs. But the condensed nature of the universe means that runs last minutes rather than hours, and the game also features a nifty autopilot feature that essentially lets you fast-travel to your targeted location.

Outlaw’s first and foremost concern is getting you into scrappy, tooth-and-nail dogfights. Unsurprisingly, this is where the game shines brightest. I said at the start the game’s nearest neighbour is Freelancer, but perhaps a more appropriate comparison would be TIE Fighter. The basic structure of RGO’s dogfights is similar to most space-sims. You trader laser-fire with space pirates as you try to get behind their thrusters so you can stick a homing missile right up their exhaust pipe (and in Rebel Galaxy the ships probably do have exhaust pipes). Lasers and beam weapons thrum in a suitably satisfying way, while enemy radios cut out with a hiss of static as their ships explode in fat orange fireballs.

It’s entertaining stuff, but RGO has two little features that give Outlaw a slight edge over other space combat games. First is its targeting mode, which gives you a strategy-game-like overview of the combat area in that particular moment. This is a useful way to orient yourself in the up-less environment of space. The keystone in RGO’s combat, however, is “autopursuit”, which lets you use right-mouse to lock onto a target and keep it within the screen. It doesn’t lock your weapons onto the target; they can still evade your laser-fire. It just means you’re not constantly spinning around trying to keep them in your canopy window like Tom Hanks in Apollo 13. The result is Outlaw has a lovely arcade feel, designed to make encounters quick, exciting, and spectacular rather than drawn-out and disorienting. These aren’t the only little features I like about Outlaw either. I like the way you see Juno’s hands flickering across the dashboard, turning dials when you activate the sublight drive, or hammering against the metalwork in frustration when you take a heavy hit of damage. I also like that you can customise all the music in the game, inserting your own tracks for space-stations or combat or just on the radio while you’re travelling.

Unfortunately, while I like lots of little things about Rebel Galaxy, it’s lacking a big feature to really call its own. It’s worth noting Outlaw is only made by a small team with a limited budget. Then again, so is Outer Wilds, and that game has ideas falling out its nose. While I appreciate that I can play pool and arcade games in the station’s simulated bars, these features ultimately feel extraneous, and perhaps those resources would have been better placed giving Rebel Galaxy an original core mechanic to call its own. I’ve no idea what that would be, of course. I’m just an idiot who’s good at putting words together (50 percent accurate - ed.). Nonetheless, while I admire Rebel Galaxy’s attempt to strip back the space-sim to a purer form, it also could have done with something that pushes the genre forward as well. One other issue is that the start of the game can be a bit of a drag, as you’re lumbered with a ship which isn’t that suited to fighting, in a game where fighting is the primary interaction. I spent several hours getting randomly obliterated by swarms of enemies, losing a lot of valuable cargo and therefore a lot of progress.

Once it gets going, however, Rebel Galaxy Outlaw is a perfectly enjoyable little game, and I’d happily recommend it. Just don’t go in expecting it to expand your horizons.