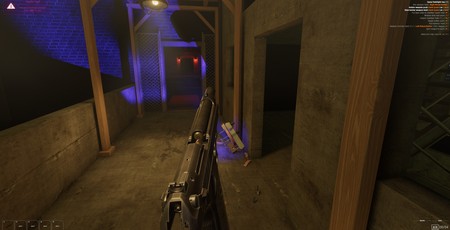 Anyone who remembers bit-tech’s former games editor, Joe Martin, may also know Receiver was one of his favourite games. A 7-day game-jam project by veteran indies Wolfire Games, Receiver was a short, tense FPS with the neat gimmick of giving you just one gun, but simulating most of that guns working parts. Far from being a simple point ‘n’ shoot, Receiver had you chambering individual rounds into the magazine, inserting that magazine, and pulling back the slide before you’d even got to the task of actually aiming it. The result was a tense and tactical shooting experience, one where you had to think carefully before pulling the trigger. The premise for Receiver 2 is essentially the same, but more. It offers a larger canvas, more guns, and more detail on each of those guns.

Prior to playing Receiver 2, I had one major reservation. While Receiver’s concept was original at the time of launch, today there are about a half-dozen VR games that offer a similar basic concept, with more tactile fidelity and nuance than Receiver’s keyboard-based controls could possibly offer. Hence, I was concerned Receiver 2 would launch as an anachronism, that its gun simulation would feel clunky and dull compared to games that let me manipulate weapons with my own (virtual) hands. As it turns out, such concerns are needless. Receiver 2’s gun simulation is incredibly satisfying. Your starting weapon is a Colt Revolver, which is aimed and fired using the mouse like any other FPS weapon. However, every other working part of the gun has its own unique control. You need to press E to release the chamber, press V to remove the shell casings, press Z to insert new bullets, then press R to replace the chamber. You can also depress the firing hammer with the F key, which makes you shoot ever-so-slightly faster.

The weapons also feel *fantastic*. That tiny Colt Revolver is terrifyingly powerful, cracking like a bullwhip whenever you pull the trigger. Later weapons, such as the Colt 1911, the Glock and the Desert Eagle are equally well-designed. It’s also surprising how quickly you become accustomed to what seems like a complex control system. After the first half-hour or so, you’ll be able to complete the reloading process in a matter of seconds. So, the guns are great, which is good news. Sadly, I have issues with basically every other aspect of Receiver 2’s design. Structurally, Receiver 2 is less an FPS and more a survival horror. The premise is you’re in a city afflicted by the “Mindkill”, a debilitating psychological phenomenon that afflicts people in terrifying ways that I won’t spoil. To safeguard yourself against the Mindkill, you have to listen to “Receiver Tapes”, cassettes scattered around the game’s procedurally-generated environments.

Standing between you and these tapes two types of enemies, stationary turrets, and flying drones that kill you with a powerful electric shock. There are no human enemies in Receiver. Personally, I find this quite disappointing, although I understand the creative reasoning behind it. Receiver is not a fast-paced action game, and these two enemy types act like guards in a stealth game. The turrets squat on a position, forcing you to come up with a plan to either deal with them or go around them, while the drones chase you around the level, creating tension as you fumble with the controls to make your weapon fire-ready. They’re also as intricately designed as the guns themselves, with multiple components that can be disabled by shooting them. Shooting the rotors of the turret disables its ability to turn, while shooting the light on the barrel disables its capability to identify targets. You can even shoot the ammo container, spilling bullets onto the ground that you can pick up and use yourself. Nonetheless, wandering around shooting the same ol’ turrets gets dull pretty quickly. It doesn’t help that they’re so small, which makes them unsatisfying to shoot, a big problem in a game fundamentally about shooting things.

Yet this is only a minor issue compared to the progression system, which is one of the worst I have encountered in a very long time. To summarise, collecting 5 tapes on a level results in level completion and an increase in your rank, which provides access to new guns and harder challenges. But when you die, it doesn’t just send you back to the start of a level, it actually reduces your rank, equivalent you throwing you back to the start of a previous level. It’s an unbelievably hostile design choice. Not least because you will die a lot playing Receiver. Not only are those turrets surprisingly tricky considering they can’t move, there are also plenty of opportunities for accidents in Receiver. For example, holstering your Colt 1911 without putting on the safety can result in a misfire, giving yourself a fatal bullet wound in the leg. That’s a cool idea. Having a misfire cost me two levels of progress is absolutely not

As if that wasn’t bad enough, you also lose all your progress on restart. All of it. Now, Wolfire has said its going to address these progression issues, but at the time of writing they’re very much present and very much unwelcome. I don’t mind restarting a level on death, but constantly losing ranks just makes me want to quit the game and knowing that I’ll lose all my progress on quitting makes me not want to play it at all. Even if those progression issues were completely resolved, I can’t help but feel that Receiver’s interesting mechanical ideas are hindered by a lack of scope. It needs more enemy types, more environment variety, and just a bit more depth to differentiate itself from the original.