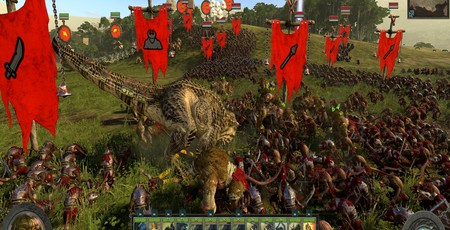 Total War: Warhammer II is the gaming equivalent of a cracking B-side. At first I wasn't sure about the choice of some of the instruments. Let's face it, it's quite hard to get excited about elves, while Lizardmen don't have the same immediate appeal as the undead hordes of the Vampire Counts or the Steam tanks of Karl Franz' Imperial forces. Yes, it lets you play as the Skaven, but delightfully verminous as the Skaven are, it's still a little bit like playing as the fifth Beatle. Once you've put it on a few times and familiarised yourself with its rhythms, however, Warhammer II proves to be a darned catchy tune. Indeed, in terms of the scope and variety the game offers, it is arguably better than the first game. I'm not sure if it's the best Total War, as at times it feels like it might collapse beneath the weight of its own mechanics, while some of the tensions introduced by the new systems occasionally threaten to tear the game apart. But one thing's for sure: It's never boring.

Warhammer II's campaign is set in Warhammer's New World, a giant island archipelago with climates that range from frozen tundra to steamy jungles and arid deserts. Here, four playable races vie for dominance (alongside the other, non-playable races from the first Total War: Warhammer): High Elves, Dark Elves, Lizardmen, and the Skaven. As with any Total War campaign, you can win through straightforward conquest and domination, capturing provinces and extinguishing factions. But added to this is a far more structured and storied route toward victory. The campaign's story revolves around the Vortex, a giant magical storm that whirls at the centre of the High-Elf homeland. The Vortex was created by the Elves and the Lizardmen to keep the forces of Chaos at bay. But the passing of a comet has disrupted the storm, and Chaos is leaking back into the world. The Elves seek to stabilise the Vortex, but the vulnerability also gives the other races a chance at controlling it for themselves. For all the races, controlling the Vortex means performing a series of rituals, which in turns means gathering the appropriate resources to perform them.

What this does is twofold. Firstly, it provides you with a clear goal to strategise around. The resource which you need to gather can be collected in various ways, from constructing specific buildings to conquering specific cities and settlements. Secondly, and perhaps more importantly, it acts as a catalyst for the game's tension, creating its own series of challenges and dilemmas that need to be resolved. This is partly because the other playable races are partaking in the same power-grab as you. So even if you haven't discovered the Lizardmen's homeland yet, they're still an active part of your game, building toward their next ritual just as you are. Hence, you want to be moving along that ritual track faster than everyone else. At the same time, however, performing a ritual gives Chaos an opportunity to squeeze into the world, manifesting as a bunch of powerful Chaos forces appearing in and around your homeland, raiding settlements, disrupting your ritual, and generally making a royal nuisance of themselves.

Hence, you must balance expanding your faction's borders to acquire more resources with preparing accordingly for the inevitable Chaos invasion when a ritual begins. It's a clever mechanic and also has the bonus of bringing Chaos into the game much earlier than in the first Total War: Warhammer. That said, it could do with a little balance tweaking. The Chaos invasions ramp up in power very quickly, to the point where even though I'd planned for it, the Chaos forces that poured forth from my second ritual almost cost me my campaign. Surrounding this chewy caramel centre to your campaign strategy is a chocolate shell of secondary considerations to bear in mind, much of which is specific to different factions. The High Elves, for example, are masters of diplomacy and espionage, able to see through the fog of war of any faction they have a trade agreement with, and are also capable of absorbing smaller factions into their own through confederations, which is enormously satisfying when you pull it off.

The Skaven, meanwhile, are driven not by power but by the need for food. They must expand constantly to satisfy their hunger, and low food supplies can lead to public disorder. If food is plentiful, however, they can use that surplus in multiple ways, such as “spending” that food to summon extra units before a battle using the Skaven's unique The Menace Below ability. Skaven cities also appear as ruins on the map, which is great for setting up ambushes, and makes treasure hunting near any Skaven faction a perilous move. The distinct nature of the Warhammer armies is its greatest contribution to the Total War series, and this is just as apparent in the second game as it was in the first, particularly during battles. The Lizardmen are probably the most distinct, able to field actual, honest-to-god dinosaurs into battle, including the mighty, Tyrannosaurus-like Feral Carnosaur. As if that wasn't enough, their magic lets them summon additional dinosaurs into the fray, and even turn regular lizardmen into dinosaurs. The downside of this monstrous power is that their armies tend to be small and expensive, while beleaguered monster units can descend into frenzy, attacking anything that's nearby.

The Skaven are the complete opposite, relying on large numbers of low-armoured units to basically overwhelm their opponents. They're similar to the Vampire Counts in many ways, except their armies don't collapse in the way the undead hordes do. Instead, Skaven units rout and rally more easily than other armies, meaning they attack in constant waves that gradually gnaw an opposing force to the bone. Even the High Elves, who are essentially the vanilla flavour of Warhammer II's races, get access to some pretty awesome flying units like Eagles and Dragons. These are particularly handy for swooping behind enemy lines to scatter archers and destroy artillery. The result is that Warhammer II undoubtedly has the most spectacular battles of any Total War game, even more-so than its older brother. More importantly, however, the AI is as robust as I've seen it in a Total War game. Initially I was concerned because enemy armies seemed to rush me all the time, but I realised this was because my army had artillery whereas theirs didn't. As the game evolved, the AI was clearly using the game's tactical palette effectively, flanking my army with cavalry, sitting back and decimating my forces with artillery when it could, and hiding units beneath the cover of woodland. There are still times when it drops the ball, but given the huge range of units and tactical possibilities Creative Assembly needs to cover now, it does a pretty good job.

The Campaign AI seems to be pretty good, too. Enemy factions would attack different cities depending on where I positioned my armies, while even allied factions wouldn't hesitate to take advantage of my misfortune. One time, a Chaos army razed one of my cities. Then an Allied army, which I thought was approaching to deal with Chaos, went and colonised it! The cheeky gits. The only frequent issue I encountered was with diplomacy, which in Warhammer II seems to be a euphemism for “incessant bloody mithering”. The surrounding factions are constantly asking you to declare war on someone, or make peace with them, even when you've rejected their entreaties a dozen times. There ought to be a longer cool-down period between individual factions contacting you with the same offer or demand.

There are a few broader issues too. With the Vortex mechanic being added on top of the race-specific systems, which were themselves heaped upon years of previous Total War iterations, the result is that Total War is now massively complicated. Even for someone who's played nearly every game in the series, it can be tough to keep track of all the spinning plates. The game helps by highlighting important decisions you need to make each turn, but this doesn't stop Warhamer II from being a lumbering and somewhat inelegant beast of a strategy game. The UI in particular is a seething mass of icons, buttons and notifications that obscures at least a quarter of the screen. Meanwhile, loading times are still lengthy, and turns still take a fair while to resolve. In addition, the combination of the Vortex mechanic and the fact that your race is suited to a particular climate makes expansion of your empire a real headache. The fact that you can no longer rely on the security of your home provinces keeps the tension up, but it also means you need to either keep a couple of armies close to home (which is tough considering how expensive armies are to maintain) or bring them back home when performing a ritual, which can take a long time. I feel like, amidst all these smaller mechanics, climate, corruption, and so forth, Total War has lost something of its essence, that simple joy of painting the map with the blood of your enemies.

Perhaps I'm just being melancholy, however. Factions like the Skaven are designed to cater to that style of play, and while Warhammer II may lack the focus of, say, Shogun 2, it makes up for that in its sheer scope, diversity, and tactical challenge. Warhammer II is the biggest, boldest, and most complex Total War yet, as monstrously impressive as any of the beasts you can bring with you to battle in its brutal fantasy world. 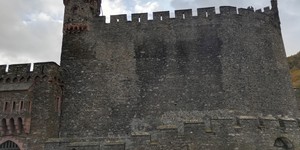 Rick gets hands-on with the long-in-development Kingdom Under Fire II. 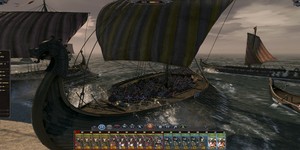