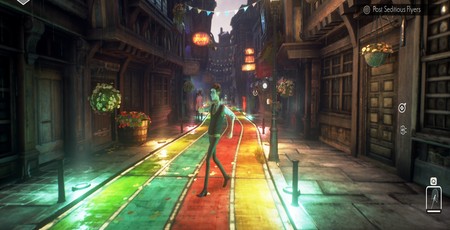 Like a repressed British gentleman being propositioned by a lady, We Happy Few is all in a muddle. This smartly dressed, highly eloquent, and often charming stealth game is absolutely brimming with potential. But the moment you ask it to do anything of substance, it completely collapses in on itself. It’s basically the video game equivalent of Jacob Rees-Mogg: well-groomed and articulate, but beneath the surface it lacks any kind of integrity. We Happy Few knows what it wants to say, and it’s capable of saying it very well. The game is set in an alternate past that meshes Britain’s swinging sixties with an Orwellian dystopia in which the Germans won the war. To keep the population controlled, the government of the renamed Wellington Wells has engineered a culture of enforced happiness. Citizens are mandated to regularly take a drug known as Joy, producing a sense of euphoria which makes people view the world in a kaleidoscope of rainbows and butterflies and blossoming trees. Anyone who refuses to take Joy, or even questions it, is labelled a Downer, and is either entered into a re-education program or chased out of town.

Glancing at a screenshot, it’s difficult to believe that We Happy Few is anything but a fantastic game. The aesthetic is one of the most beautiful and distinctive since Dishonored, a place where chocolate-box villages connected by rainbow-streets exist in the institutional shadow of looming brutalist towers. Everyone wears masks that force their faces into a rictus grin, from the Bobbies that patrol village streets to the Doctors who skulk around trying to sniff out downers. What makes the situation even more bizarre is that this aesthetic is matched by the game’s narrative. We Happy Few spent a lengthy period in Early Access, and one of the major additions in that time was a central plot. You’d think a story that was added last would be the game’s weakest aspect, but it’s the only thing that saves We Happy Few from being a total disaster.

The story is told from three different perspectives, commencing with Arthur, a former journalist turned censor tormented by memories of his missing brother, who was forcibly relocated to Germany at the outset of the occupation. Arthur’s guilt eventually causes him to be labelled a Downer, forcing him to attempt to flee the country entirely. Later on, you’ll play as a Chemist and family friend of Arthur’s Sally, and Ollie, a former soldier who is suffering from PTSD. It’s a long story, with each act taking at least 10 hours to complete. But this only makes it more impressive that it is so consistently entertaining. We Happy Few is fantastically well written, witty, inventive, and makes superb use of its British setting. The mission setups are a wonderful blend of sinister and absurd too. One example , which starts off with Arthur trying to get some cod-liver oil for a friend, turns into a massive journalistic investigation revealing a terrifying secret that the government is keeping from its citizens. When you finally encounter one of the conspiracy’s ringleaders, he accuses you of trying to bring down society, to which Arthur replies, 'Actually I’m just here to get some cod-liver oil.'

It’s genuinely one of the best stories I’ve encountered in a first-person game, which makes it even more tragic that the rest of the game is such a mess. You might assume from looking at We Happy Few that it’s an immersive sim in the vein of Dishonored and Bioshock. And it is, a little bit. Primarily, though, We Happy Few is a survival game. You need to regularly intake food and water to stay functional, while crafting also plays a prominent role. The map is also procedurally generated, with large expanses of fields and dilapidated towns separating the urban hubs. Sadly, none of this is fun. The crafting brings nothing to the table, because it is in no way inventive or presented with any kind of tactility. All you do is constantly hoover up items to produce dozens of objects, about a fifth of which you’ll ever actually have cause to use. Meanwhile, the procedural element of the game simply causes environments to be far too large and far too repetitive, forcing you to trek for ages through samey looking fields to reach samey looking towns.

The reason for all this unnecessary expanse is We Happy Few wants to offer a societal simulation. Each area you travel through expects a certain kind of behaviour, and you need to emulate that behaviour to avoid alerting the authorities. A key element of this is taking Joy to appear happy and avoid the scrutiny of the Bobbies and Doctors. Doing this triggers an impressive change in your perception, but the euphoria doesn’t last long, and brings you crashing down in a way that reveals the true nature of your surroundings. Crashing also raises the suspicion of those around you, so often all taking Joy does is delay the inevitable. Eventually, you unlock the ability to craft a drug known as Sunshine, which mimics the effects of Joy with none of the drawbacks. Essentially, We Happy Few removes one of its key features from the game to make it less inconvenient to play, a weird thread that runs throughout the experience. Much of the skill-tree is dedicated to removing player inconveniences such as the effects of thirst and hunger, or enabling you to run around towns like a toddler without arousing suspicion.

What’s left at the end of that self-pruning skill-tree is a simplistic stealth game that lacks the depth to cover We Happy Few’s sprawl. The main missions often involve sneaking into a guarded area to retrieve a certain item or perform a certain activity. But the enemies offer little in the way of either tactical or combat challenge, while your items and abilities don’t really let you manipulate the game in any interesting way. For example, you can craft an item called Crash that basically dumps an NPC's system of Joy. But when I used it on a Bobby, nothing seemed to happen. The one aspect of We Happy Few's stealth I enjoyed was how Arthur can hide behind a newspaper by sitting on park benches, but even that relies on the incredibly sketchy AI systems to work. There's all kinds of other stuff I could point out too, like the oodles of bugs and glitches I've encountered, the constant fatting around in your inventory to avoid being encumbered all the time, or how ridiculous it is that every person in town chases you when you're branded a Downer, turning the game into the world's most macabre Benny Hill-sketch. Ultimately, though, the core problem is that there’s far too much stuff going on, and consequently none of it feels either unique or well refined (with the exception of the writing). Instead of gearing the mechanics to suit the theme, We Happy Few hopped on an Early Access trend that now feels three years out of date, and not even the talent of its artists and writers can rescue the bland and confused mess that is the game. We Happy Few may look like a psychedelic Bioshock, but in the end it left me feeling uncomfortably numb.