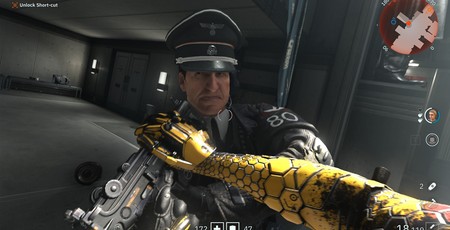 I’ve always liked MachineGames’ Wolfenstein reboots, but I’ve also always felt like they could be better. While I appreciate the studio’s desire to make B.J. Blazkowicz a fully rounded character with a story to match, I’ve found nu-Wolfenstein’s approach to storytelling sometimes got in the way of what Wolfenstein is primarily about, namely blowing up horrible Nazis with big guns. The second game in particular suffered this problem, seemingly unable to go five minutes without throwing in a cutscene or a fixed set-piece or a segment where you just walk around not doing much. It was the gaming equivalent of American Football, constantly stopping and starting. A shooter needs to me more like regular football. For a game to be great, the action’s gotta flow.

Wolfenstein: Youngblood fixes this problem…eventually. Youngblood is a very different and kinda weird experiment compared to the previous Wolfenstein games. I started out not enjoying it at all and ended up slightly in love with it. Youngblood takes place in 1980 and sees you assume the role of either Soph or Jess Blazkowicz, the twin daughters of B.J.. It’s the first cooperative Wolfenstein game, although it can be played single-player without losing too much from the experience. The rough plot is that, after years of relative peace living in Mesquite, Texas, B.J. suddenly disappears. Both his wife and the FBI are unable to find him, but the girls stumble on some information that suggests he’s in Nazi-occupied Paris. Rather than inform the FBI, the girls decide that they’re going to rescue their dad themselves.

If you played the first two Wolfensteins for their story and characterisation, Youngblood is nowhere near as involved in this area. Even in the context of Wolfenstein’s own bonkers world, the premise makes little sense, while the writing struggles with the sheer absurdity of the situation. For example, Jess and Soph are accompanied by a hacker friend of theirs named Abby, who provides them with their special armoured suits. When the girls query her about where she got them from, she shrugs and says 'Made them,' as if she’d baked a cake. It’s completely silly and nonsensical. But it doesn’t matter, because Youngblood isn’t so much a story about people as it is about a place, specifically Paris. You may have noticed that there’s an extra developer involved with Youngblood, Arkane Studios, creators of Dishonored and Prey. Its presence is a big clue regarding how Youngblood differs from the previous games.

Basically, MachineGames has joined up with Arkane to transform Paris into Nazi Dunwall. There are no levels as such. Instead, you get to explore four individual city districts, three of which are open from the moment the game’s introductory sequence ends. Your ultimate goal is to infiltrate a secret facility known as Lab X, but to do that you must first disable three 'Brother' security towers, one for each district. In this manner, Youngblood blends the mechanics of Wolfenstein with the structure of Dishonored, providing you with several complex open environments to explore and master. As you can probably imagine with Arkane involved, these environments are absolutely stunning to behold and crammed with detail. Little Berlin, for example, centres around a sun-drenched boulevard with French cafés on the ground floor and Parisian apartments above. Detention Area 4, meanwhile, is a ramshackle residential area dominated by a giant fortified checkpoint.

These places are not mere backdrops; they’re complex 3D spaces filled with shortcuts and secrets that you’ll explore multiple times in any one play-through. Yet while the design is wonderful, and I came to really appreciate it, Youngblood does a poor job of introducing players to the new structure. Your primary objective in each district is to get into the Brother Tower. However, each tower is heavily guarded at the main entrance, and you need to be at least level 20 to assault it successfully. There are secret entrances to each tower hidden in the surrounding area, but you need to find them.

You do this by completing specific side missions that unlock as you progress through the levels. More problematic is Youngblood doesn’t notify you when new missions become available, so for ages I was wandering around Little Berlin trying to figure out what the hell I was supposed to do. A secondary issue is that Wolfenstein’s stealth systems are nowhere near as robust as Dishonored’s. This shouldn’t be a problem, because Wolfenstein is a shooter, but abilities like cloak imply that stealth is a viable way to play the game. The reality is that you can sneak around a little, but slip up even slightly and you’re going to get involved in a massive gunfight. Consequently, at first Youngblood seems like a bunch of diverse ideas that don’t really fit together. Once you’ve got a few levels under your belt, however, the experience becomes a whole lot smoother. The turning point for me was assaulting the first Brother Tower. These are undoubtedly the main events of Wolfenstein, massive missions split into multiple stages as you go from breaking through the tower’s perimeter, then ascending floor-by-floor, killing Nazis by the dozen as you go. Each tower also expands your arsenal with a new weapon, which gives you more options for battling the tougher enemies Youngblood throws at you.

Youngblood never quite reaches the conceptual highs of the previous games; there are no missions set on the Moon or in a radioactive wasteland or whatever. But all of Youngblood’s levels are larger, better connected, and not constantly interrupted by cutscenes. This means that, crucially, combat encounters flow better. You get the space and time to appreciate each environment and the enemies the game throws at you. Some of these, like the prowling Panzerhunds and the gigantic Zittadelle mechs, are a joy to battle. Combat is also more acrobatic than Wolfenstein thanks to a range of additional skills the girls can acquire. You start off with a double jump that lets you venture to higher places, but you can also unlock Crush, an ability that lets you pound the ground to do damage to enemies. There’s also an upgrade to Crush that lets you knock down enemies by running into them. At higher levels, this takedown is so powerful it can make weaker enemies explode.

I get the feeling that Youngblood isn’t going to be as popular with its audience as the main Wolfenstein games, which is a shame because from a pure shooter perspective it’s the most consistently entertaining of the bunch. Once you’ve got past the slightly confused opening, it evolves into a spectacular and thrilling FPS with far more interesting level design than any other game in the series.

The expansion to MachineGames' excellent reboot retains the great gunplay, but lacks imagination.

Wolfenstein is a cracking shooter bogged down by unnecessary systems.