Madden NFL 10 is the latest touchdown from EA’s NFL factory. As you can imagine, this game will sell by the truck load in North America; you only have to see their massive college football stadiums to be sure of that, But how about over here in Blighty, where we play football instead of handegg? Does it still hold some merit as a game in it’s own right?

Firstly, to put the game in British, terms we’ll say it has a very FIFA-like feel to it, with similar menu layout and so on. This isn’t too surprising since they’re both developed by EA, but it means that the game is immediately familiar to fans of sports games.

Being unfamiliar with the actual rules of American football ourselves, we went straight into the training to learn the ropes. There are two types of training: regular, which are just football drills on a normal training pitch, and virtual training, which is a much more interesting feature.

Click to enlarge
Unlike regular training, where you run down a normal green turf pitch, virtual trainer instead takes place in a virtual environment, with EA trying to liven it up by giving it a TRON-style black background with vibrantly coloured players. You can then master your new skills with Madden Test, which are challenges based on the basics, set in the same virtual environment. This is one of the most helpful features of the game, teaching you not only how to play the game but also what drills and tactics to expect. As novices, we found this quite fun and tried it quite a few times before tackling the larger game, honing our skills and giving ourselves huge headaches courtesy of the TRON visual style.

Another feature of Madden NFL 10 is the included mini-games. These are small contests against the AI that give you an insight of some of the player’s attributes. You start off with a 100m sprint, then there’s a weight-lifting contest, followed by more football drills.

Click to enlarge
In each mini-game you go up against the AI, where you both compete for points. The points are rewarded for achieving the task, like getting a touchdown or completing a pass, and the better the runs or throws, the more points you achieve at the end of it all. Like training, this helps players improve technique, but the mini-games aren't as entertaining as the other mode, and constantly completing against AI in a small number of contests does limit the appeal. As well as this, some of the contests, like the running and weight-lifting feel like they have been copied straight from athletic games such as Beijing 2008, which begs the question of where the originality might have gone.

A feature that will appeal to the more hardcore NFL fans, but is of no appeal to the rest of us, is the new Madden Moments feature. This allows players to re-enact some of the most memorable moments of the NFL, or even rewrite history with how they feel it should have been.

Finally, NFL Rosters is where you go to organize your team and it includes a number of features that enable you to keep your tactics up to date as you manually move players around to mirror real NFL transfers or according to whim. You can also check up on the stats of players with a number of stat-tracking features, including the Hall of Fame. It was honestly quite useless to us, but gamers who are more in-tune with the series will likely appreciate it. 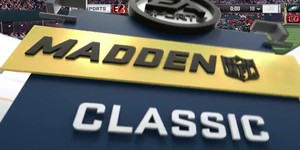 Includes $1 million fund for the victims.

An $11m award made in court to the programmer of the original Madden game has been thrown out by a district judge.