It’s only taken seventeen years, but Opposing Force’s reign as the best expansion pack ever made is finally at an end. There’s a new king in town, and his name is Geralt of Rivia. I fully expected The Witcher 3: Blood and Wine to be good. The quality of CDProjekt’s output has been rapidly escalating ever since the launch of The Witcher 2 in 2011. But I didn’t anticipate it being the magnificent, riotously entertaining tour-de-force it is. Blood and Wine isn’t merely a big chunk of extra content for The Witcher 3, although it demonstrates such generosity that any other developer would have called this a game in its own right. No, this is The Witcher 3 Enhanced. Distilled. Refined. With Blood and Wine, CDProjekt has taken the fundamental ideas explored in the vanilla game, sealed them in a barrel, and left them in a cool, dark cellar to mature for twelve months. What has emerged is a fiercely intoxicating vintage, bursting with colour and flavour, the perfect way to toast the departure of the best RPG to come along in years and years and years.

Geralt of Rivia’s last adventure sees him travelling to the Duchy of Toussaint, where a monster known as the Beast of Beauclair has ripped several large holes in several large noblemen. Contracted by the Duchess herself and sought out directly by a couple of her closest Knights, Geralt is tasked with tracking down and slaying the beast, for which he will be rewarded with enough lands and coin to spend the rest of his life in peace. For the Witcher, it’s business as usual. By which I of course mean his contract proves distinctly unusual, filled with surprising twists and dark turns that lead to impossible choices and dramatic consequences. That said, there are some important departures in Blood and Wine both thematically and tonally that make this expansion both a refreshing change and a perfect end to Geralt’s adventures.

To begin with, there’s Toussaint itself. A peaceful realm that is a literal world away from the war-torn lands of Velen and Skellige, Toussaint is a fantasy paradise. As if the name wasn’t enough of a clue, its rolling green hills and blissfully blue rivers are dotted with lavish chateaus and verdant vineyards heavily inspired by the French countryside. At the centre of this idyllic landscape is Beauclair, a bustling Romanesque city surrounding a towering fairytale palace, its structure heavily based on Normandy’s island commune of Mont Saint-Michel. It’s a majestic piece of environment design, beautiful almost to the absurd. Indeed, there’s a more humorous tone to Blood and Wine as a whole. Toussaint is a land ruled by chivalry and honour, where Knights-errant are genuinely paid to seek out damsels in distress and do battle with hulking giants. If the Knights aren’t pursuing glory in the field, they seek it in the lists, taking part in extravagant and stupidly dangerous tournament games, all for the favour of some fair maiden. Irony and cynicism aren’t looked down upon in Toussaint; they don’t exist. 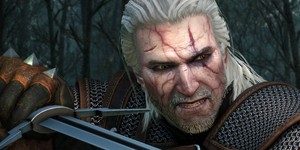