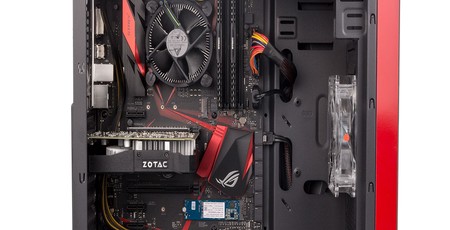 Intel Optane memory promises to deliver what so-called SSHDs (solid-state hybrid drives) did by combining a smart, high-speed cache with slower and cheaper bulk storage to deliver a storage solution that has high capacity, rapid responsiveness, and a reasonable price tag. It's been available for a good few months now, and for PC desktops it hasn't really made a huge impact. The cost of the two available cache modules (just over £40 for 16GB, £75 for 32GB) and the need to have a seventh-generation Intel Core CPU and supporting chipset means that for most people the tried-and-tested advice of having an SSD for OS and program installations and one or more cheaper but much higher capacity HDDs for everything else remains best.

Still, various tests and reviews around the internet do point out that it does actually work rather well and that for a specific set of users it may be the optimal choice. Coming in at £700, we have the Enigma K5 system from PC Specialist, and this is exactly the type of price point where Optane has hopes of being effective, primarily because it's the sort of budget where the cost of adding an SSD might give you pause for thought. 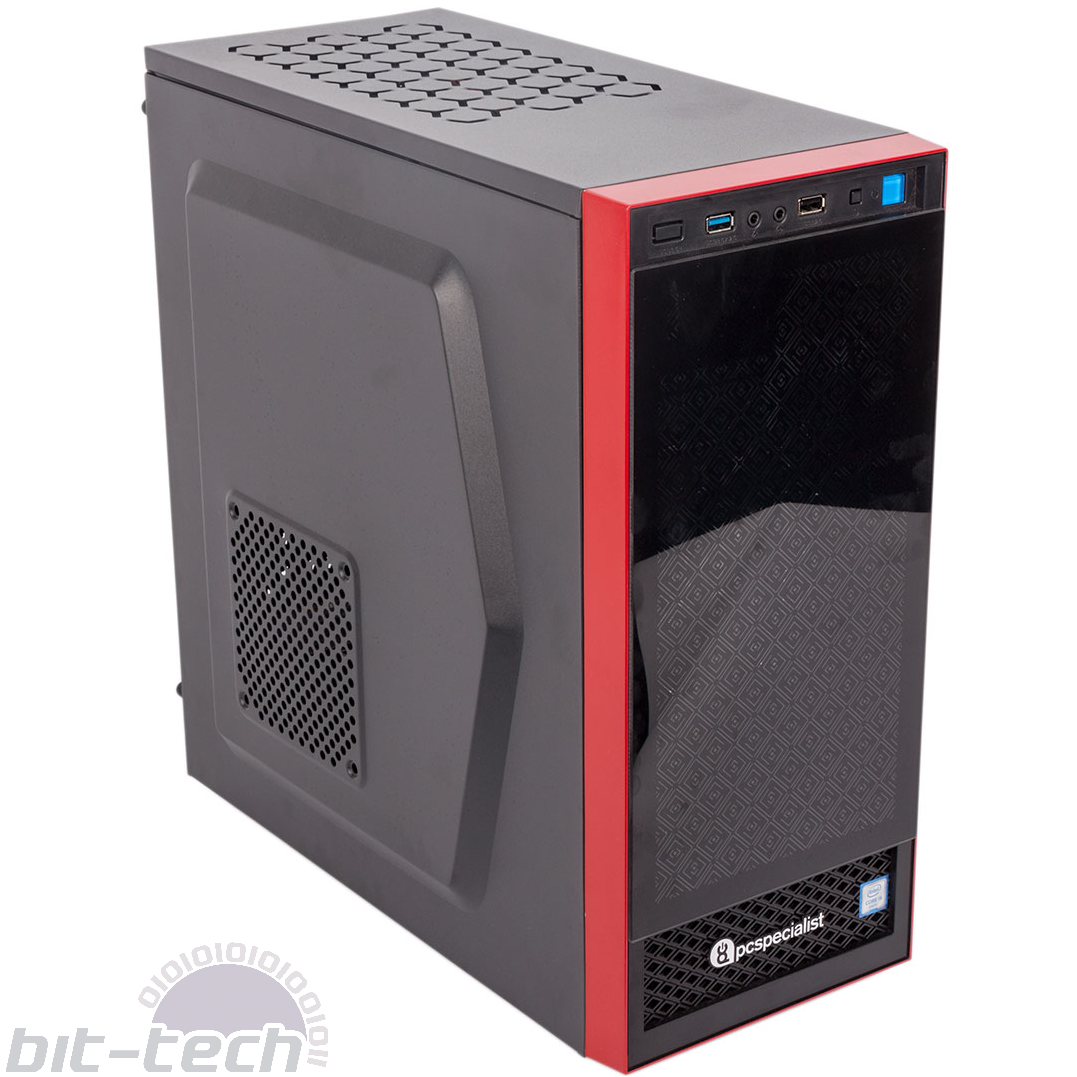 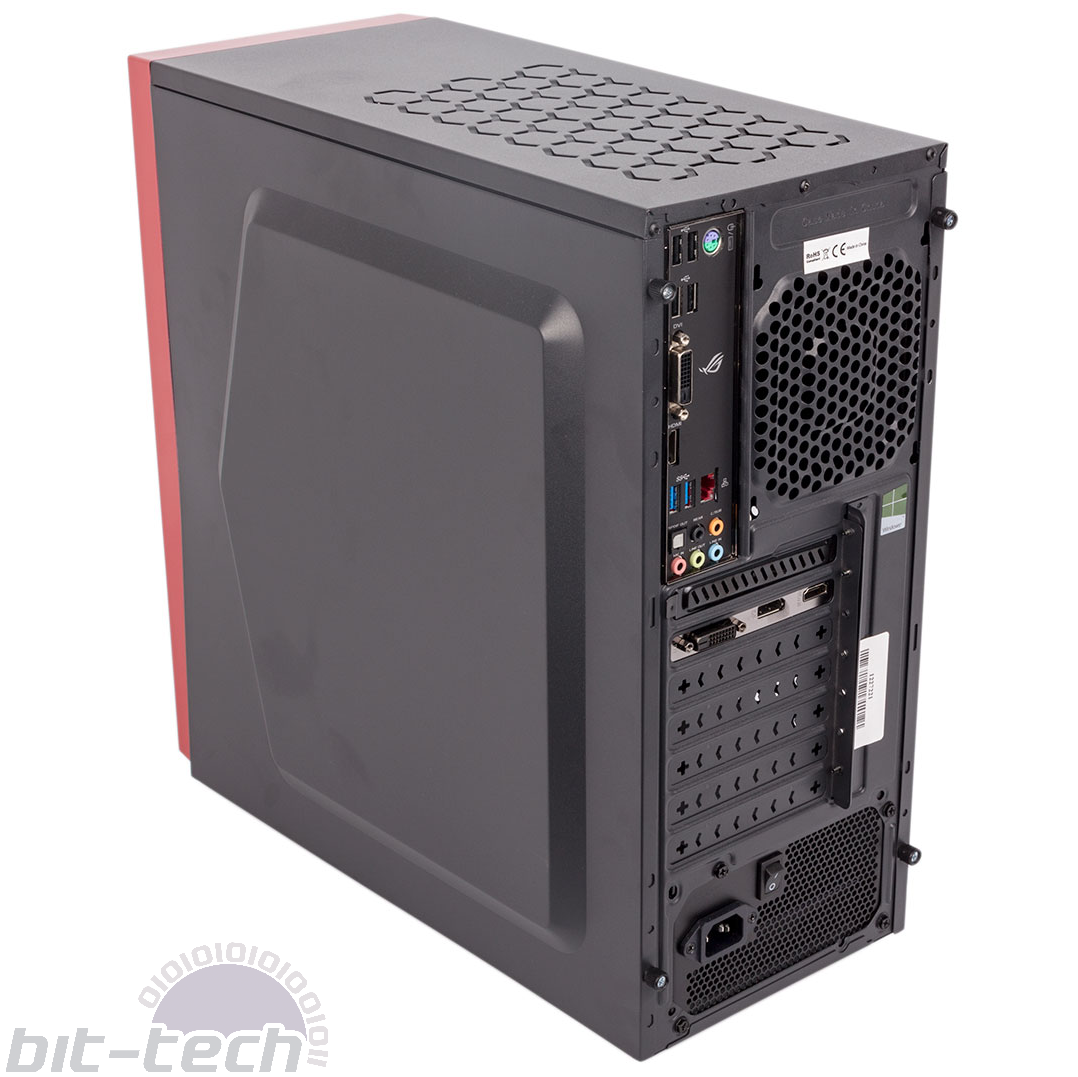 The system is presented in a fairly basic In Win OEM chassis with USB 3.0 and USB 2.0 ports up front, extruded side panels with no window, and a front panel that has a red trim and a translucent front fascia sporting a diamond pattern. The single 120mm red LED front intake fan can be seen glowing through this front section, but that's about the limit of the visual niceties. It's also the limit of the case's airflow, as the side and rear 120mm mounts are unfilled; this is not the calibre of system where this is likely to matter, however. In terms of filters, the PSU is guarded by a thin sheet, but the front and sides are unprotected, so some dust will enter and build up over time.

Moving inside, we find a system built around the Intel B250 platform, starting with the Asus Strix B250H Gaming motherboard. With striking red and black visuals that match the rest of the system, this appears to be a solid foundation for a mid-range gaming rig, even if CPU overclocking isn't supported. This motherboard nets you great onboard audio courtesy of ROG SupremeFX that's built around the Realtek S1220A codec found in many high-end boards. There are also numerous SATA ports and a spare M.2 2280 port (PCIe or SATA) for upgrading storage further down the line. There are only two USB 3.0 ports on the back, but three in total should still be enough for most, as there are plenty of USB 2.0 ports for peripherals. 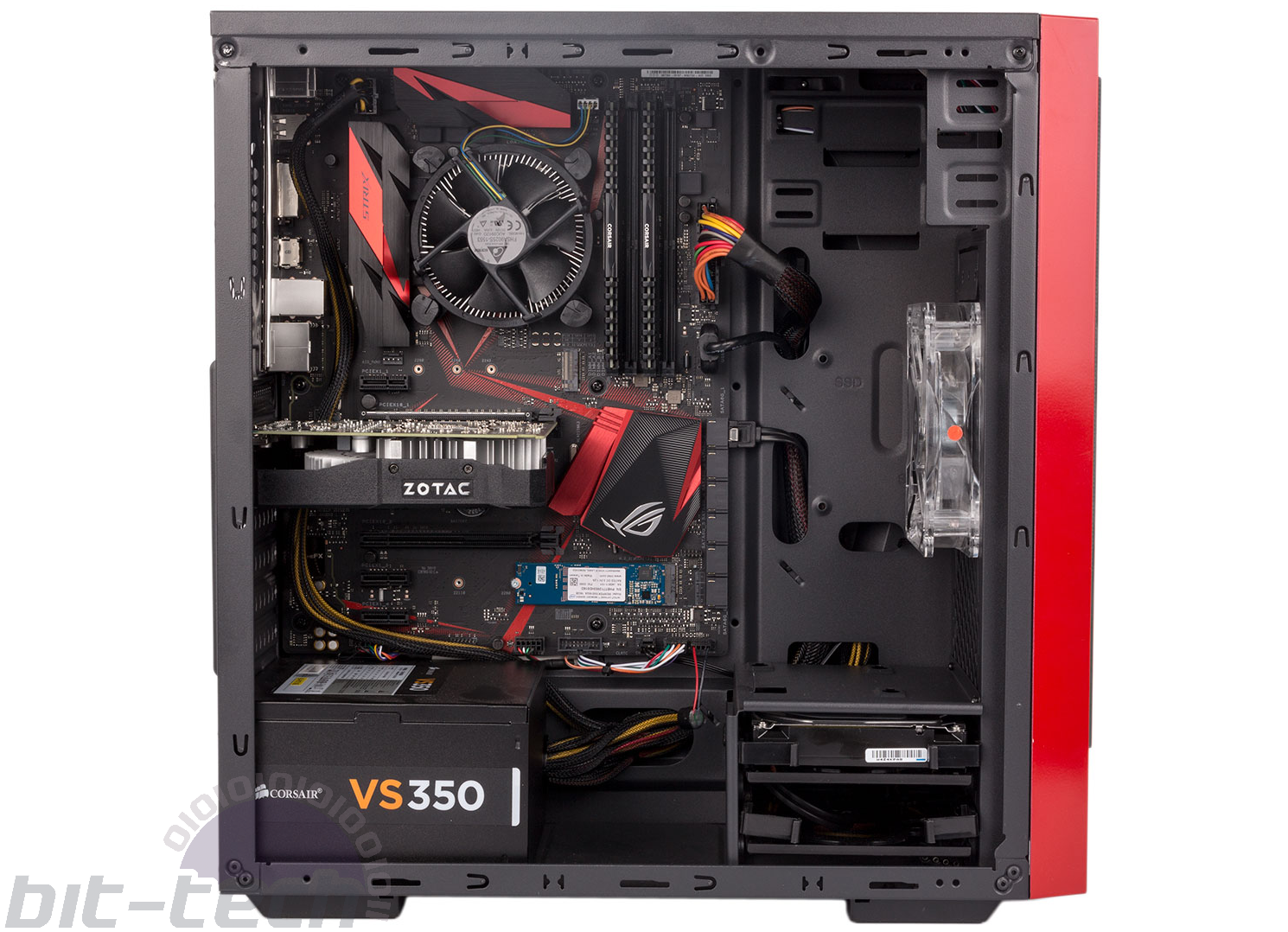 PC Specialist has filled the board with an Intel Core i5-7400, a quad-core Kaby Lake CPU with a 3GHz base frequency, 3.5GHz turbo frequency (or 3.3GHz on all cores), and this is paired with a dual-channel, 8GB Corsair Vengeance memory kit running at 2,133MHz. This leaves you with two spare memory slots, so upgrading to 16GB in the future will be easy.

It's been a while since we've seen an Intel stock CPU cooler. Obviously, it wouldn't be our first choice, but in a budget system with an efficient, non-overclocked CPU, it makes sense as an area in which to save a bit of cash.

The GPU is very much an entry-level model. Specifically, we have the Zotac GTX 1050 Ti, an ITX-sized dual-slot card packing 4GB of GDDR5 and coming with DisplayPort 1.4, HDMI 2.0b, and dual-link DVI-I outputs. Gameplay at 1080p will be the limit, and the focus will be casual and esports games rather than the latest AAA releases, although many will still be playable with the settings turned down. There is also ample scope for upgrading the GPU, as the case has space for much longer cards.

The blue Intel Optane module can be seen starkly contrasting with the black motherboard PCB, occupying the lower M.2 slot. It's the lower capacity module (16GB) and is a PCIe 3.0 device with claimed read and write speeds of 900MB/s and 145MB/s respectively, though the main area where it's looking to beat HDDs is access time/latency. The Optane module works in tandem with the single 2TB 3.5" HDD that comes courtesy of Toshiba. Since this is a prebuilt system, no setup is required; you simply boot to the desktop as normal, whereupon you'll see a tray icon indicating the Optane is running. The cache-enhanced volume is presented at all levels as a single 2TB volume; you cannot access the Optane stick independently.

The Corsair VS350 PSU powers everything. 350W may not seem like a lot, but nowadays it's easily enough for this type of system, and you'll have headroom for GPU upgrades (it has a single 6+2-pin PCIe cable). Its certification is only 80 Plus White, and the cables are non-modular, but it's there to do a job and we're sure it will do just fine since it's from Corsair. 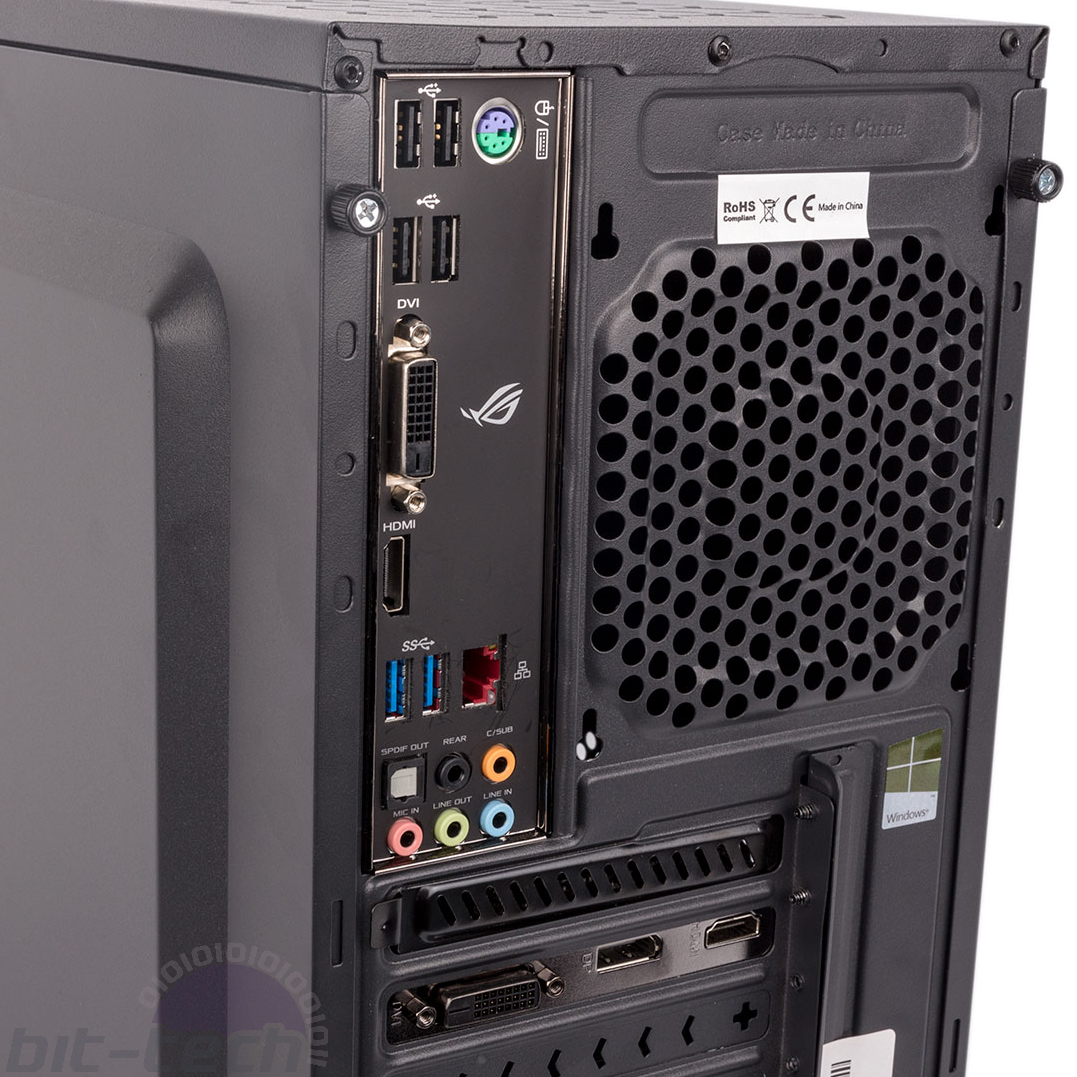 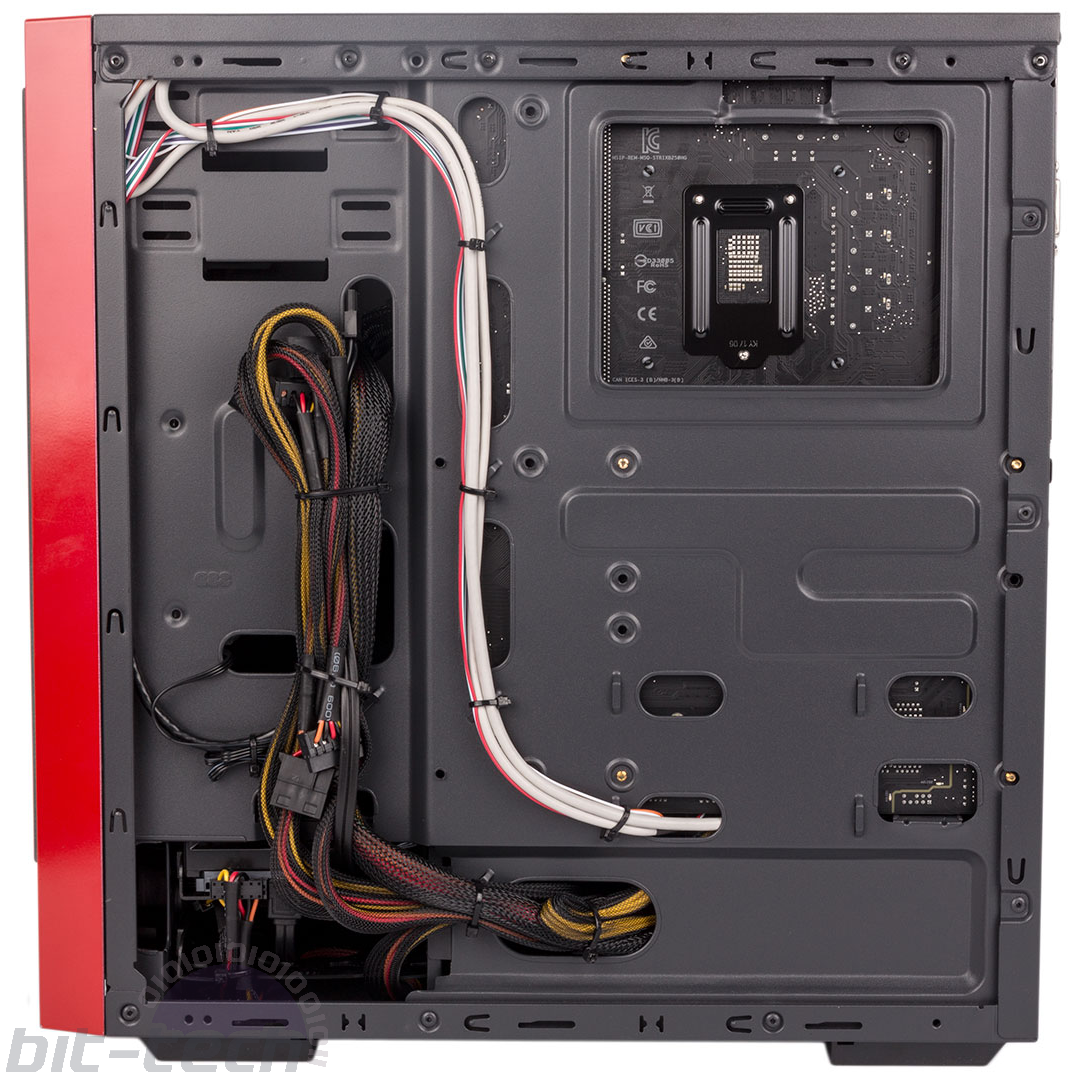 Despite the case having no window, PC Specialist has not slacked on keeping the inside clean and tidy – the system's build quality is very good. Even the colour scheme is mostly consistent, and solid cable routing work behind the motherboard tray means that the main area is kept neat, the one exception being the eight-pin CPU power cable, which is forced by the case to be routed across the motherboard.

PC Specialist has used the default BIOS settings, and that's fine by us. With no overclocking available, there's little need to deviate from what works. The Windows desktop is uncluttered except for the inclusion of Bullguard – you can quickly disable and remove this, however, as it's only trial software anyway.

The company offers its standard three-year warranty terms with this PC, meaning that collect and return is only offered for one month while parts are covered for a year.