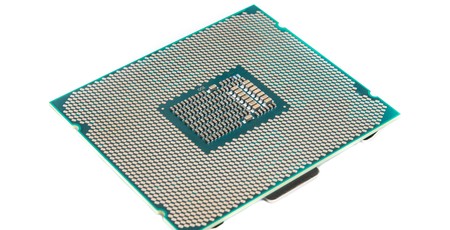 Six hours ahead of its original embargo, Intel has allowed us to lift the veils off the performance results for Cascade Lake-X - specifically the Core i9-10980XE, the only chip of the family we've been sampled with so far. Unsurprisingly, it's the successor to the 18c/36t Core i9-9980XE, but as we're sadly used to with Intel now, there's no major architectural tweak nor manufacturing process shrink. The biggest change this time is pricing by way of massive cuts announced to the four new HEDT CPUs landing today. We certainly commiserate with anyone that bought a Core i9-9980XE last year for £2,000 or more. Depreciation is harsh at the best of times, but when the company that made the product in the first place announces a successor to your mighty £2,000 CPU for half the price, it's got to touch a nerve or two.

Ironically, Intel has done precisely what we suggested in our Core i9-9980XE review: 'Were it to cost £1,200, it would perhaps justify its extra outlay compared the £800 Threadripper 2950X'. Jokes aside, the kind of person to own such a CPU probably isn't too concerned about such things, but the fact remains that Cascade Lake-X's price cuts are as telling as they are remarkable. However, is lopping huge chunks out of your margins going to work for Intel, or is this ageing 14nm architecture just too old to compete? 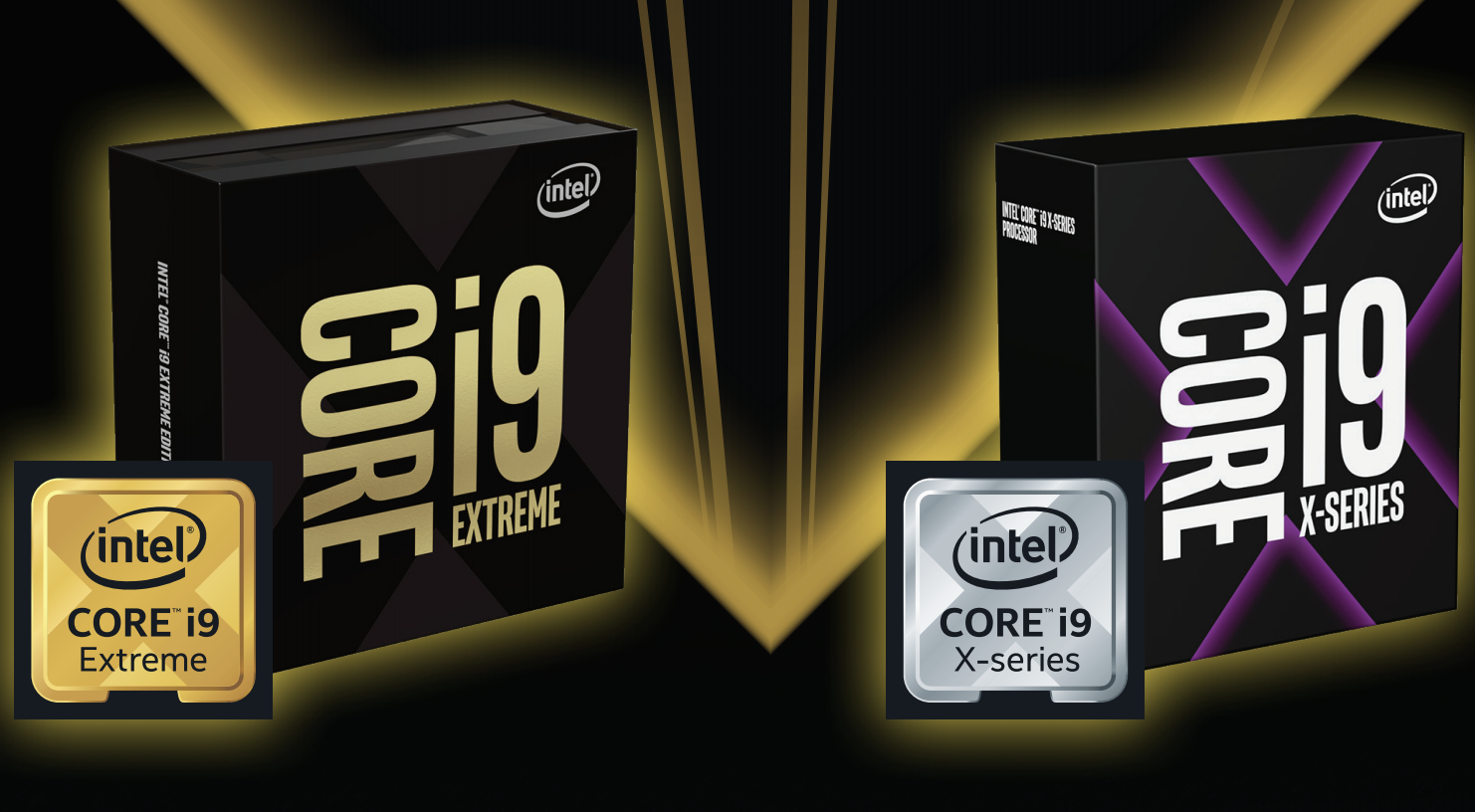 The competition is stiff and unrelenting. The Ryzen 9 3950X, which is arguably one of the instigators of said price cuts, has proven itself to be a fantastic mainstream powerhouse for those that are happy with modest I/O and single GPUs. It also retails for around a third of what the Core i9-9980XE cost a year ago (our review went live a year ago tomorrow, in fact). Yet, it promises similar performance to this new Intel CPU. There's pressure from above, too, with 24- and 32-core 3rd Gen Threadripper CPUs landing very shortly, wielding the 7nm Zen 2 architecture. The question is, has Intel carved out a niche for itself with these new, cheaper HEDT CPUs, fending off the Ryzen 9 with more bandwidth and quad-channel memory support but also providing some relief to your wallet compared to AMD's Socket TRX4 motherboards and much dearer 3rd Gen Threadripper CPUs?

The specifications haven't changed much, but there are some noticeable boosts to frequencies. The peak boost frequency, Turbo Boost Max Technology 3.0 in X-Series CPUs, was 4.4GHz with the Core i9-7980XE, rising to 4.5GHz with the Core i9-9980XE, and this time we get 4.8GHz. That should provide a welcome bump to lightly-threaded workloads, although the all-core boost remains at 3.8GHz. There's also one less CPU in the stack too, with no 16-core model (scared of the Ryzen 9 3950X much?), but Intel maintains a full spread of PCIe 3.0 lane support across the range. This stat has increased from a usable 44 lanes to 48, although it was only the sub 10-core parts that lacked this in the past anyway.

In terms of compatibility, we should point out that Cascade Lake-X CPUs will be compatible with current X299 motherboards, so if you're using a Core i9-7900X now and fancy an upgrade you're in luck. The socket is identical too, but it's a rare case of Intel sticking with a socket and AMD moving on and leaving owners high and dry in the case of the X399 chipset, with the new 3rd Gen Threadripper boards only working in new TRX40 chipset motherboards. It's yet another trump card Intel has along with the price cuts - AMD will focus on performance and massive I/O, 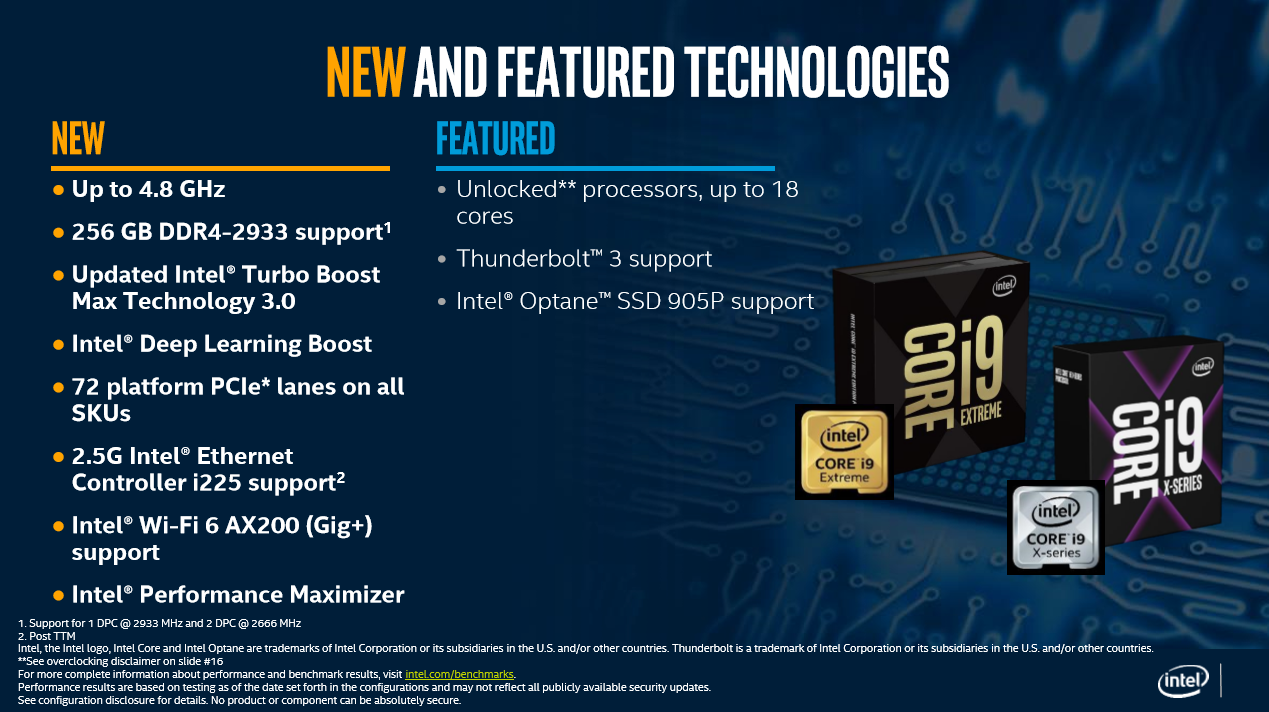 There are other new features too, such as faster native memory support as well as a higher 256GB (as opposed to 128GB) memory capacity, plus the option to support 2.5G Intel Ethernet and Wi-Fi 6 AX200 controllers should motherboard manufacturers so wish. There are also two hardware-level and three software-based security mitigations. As we said, the real juicy stuff is with the price, but in our conversations with Intel, there are hints that it's seen a fair bit of refinement with Cascade Lane-X with a huge stepping range with what is now 14nm++. The benefits of this refinement haven't amounted to much in the past, so lets' dive in and see what all the fuss is about. 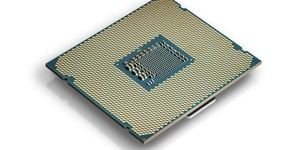