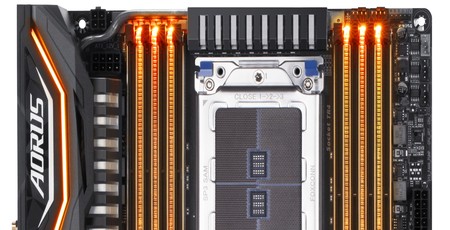 As far as X399 chipset motherboards for AMD's Threadripper CPUs go, Asus and MSI have done sterling work so far, and today we're looking at Gigabyte's effort in the form of the X399 Aorus Gaming 7. This £360 board is a beast, but while it certainly looks like it means business out of the box, it's not until you power it on that it really reveals what it's all about.

The RGB LED lighting is rather insane and stretches to almost every corner of the board from between the DIMM slots to great-looking surrounds on each of the 16x PCIe slots. It really does look spectacular, if you're into that sort of thing of course, but you also turn them off or set them to a less vivid shade too.

Price-wise, we're looking at a board that's in direct competition with MSI's X399 Gaming Pro Carbon AC, which has a slightly more refined take on lighting. Gigabyte spreads its heatsinks around a bit more, though, with two large examples dealing with the CPU power circuitry rather than just one huge skyscraper on the MSI. However, both boards sport three heatsink-cooled M.2 ports with the main difference being the Gigabyte board shunting two to the bottom of the PCB due to the fact it has five 16x PCIe slots as opposed to four on the MSI board. All the major overclocking and testing tools are here such as power, reset, and CMOS clear buttons arranged in a neat trio at the base of the board along with a generous eight four-pin hybrid fan headers with one offering a hefty 3A output - 1A more than the MSI - and this can power any Laing DDC or D5 pump we know about with 36W of power on offer, plus it has the benefit of pump speed control. Being ATX and packing in so much has meant that Gigabyte has opted for 8+4-pin CPU power connectors instead of 8+8-pin on the MSI and Asus boards we've seen so far, and there's also an eight-phase CPU power delivery. You don't get quite as many storage and I/O options as the MSI board, with fewer USB ports in total, for example, but you do get the latest options such as a USB 3.1 header plus Type-A and Type-C ports on the rear I/O panel. The M.2 heatsinks are a little meatier than those on MSI's effort but work in much the same way with a large thermal pad connecting the SSD and heatsink. They're slightly easier to install on the Gigabyte board, as there's just a single screw to deal with when securing the heatsink and SSD. The box is less populated with accessories, though, with just a desktop Wi-Fi aerial on offer, however this sports new smaller pop-in connectors which are a huge amount easier to deal with than the usual screw fittings. As there are fewer ports on the rear I/O panel, Gigabyte has been able to integrate the Intel 8265 802ac Wi-Fi module here instead, while on the MSI board you get a separate daughter card. Otherwise, the rear panel is maybe a bit skinny looking for a £360 Gaming 7 motherboard, and it's probably worth noting the network adaptor is Realtek-powered too as opposed to Intel. Audio is your standard Realtek ALC 1220, but Gigabyte adds a smart headphone amp, WIMI capacitors, and a DAC-dedicated USB port with adjustable voltage. 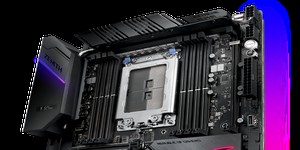 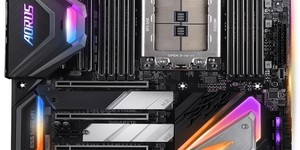