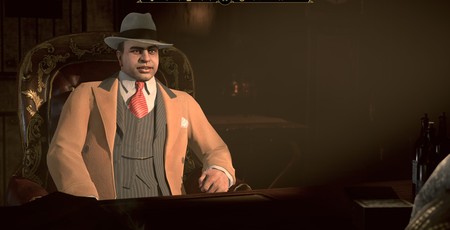 Empire of Sin had potential to be brilliant. A hybrid between management sim and RPG, it puts you in the role of a crime boss in prohibition-era Chicago tasked with becoming the only game in town, knocking off the competition and monopolising the alcohol trade. Steeped in 1930s style, it has an intriguing approach to systems-driven storytelling. Unfortunately, the experience is let down by a cavalcade of bugs and several mechanics that simply don’t work.
Initially, Empire of Sin presents as a management sim, sort-of SimCity with guns. You select one of 14 different crime-bosses (including Al Capone, who I chose because I’m boring). Starting out with nothing but the shirt on your back and the gun in your pocket, you immediately walk into a local speakeasy and claim it as your own through the deft negotiation tactic of shooting everyone dead. 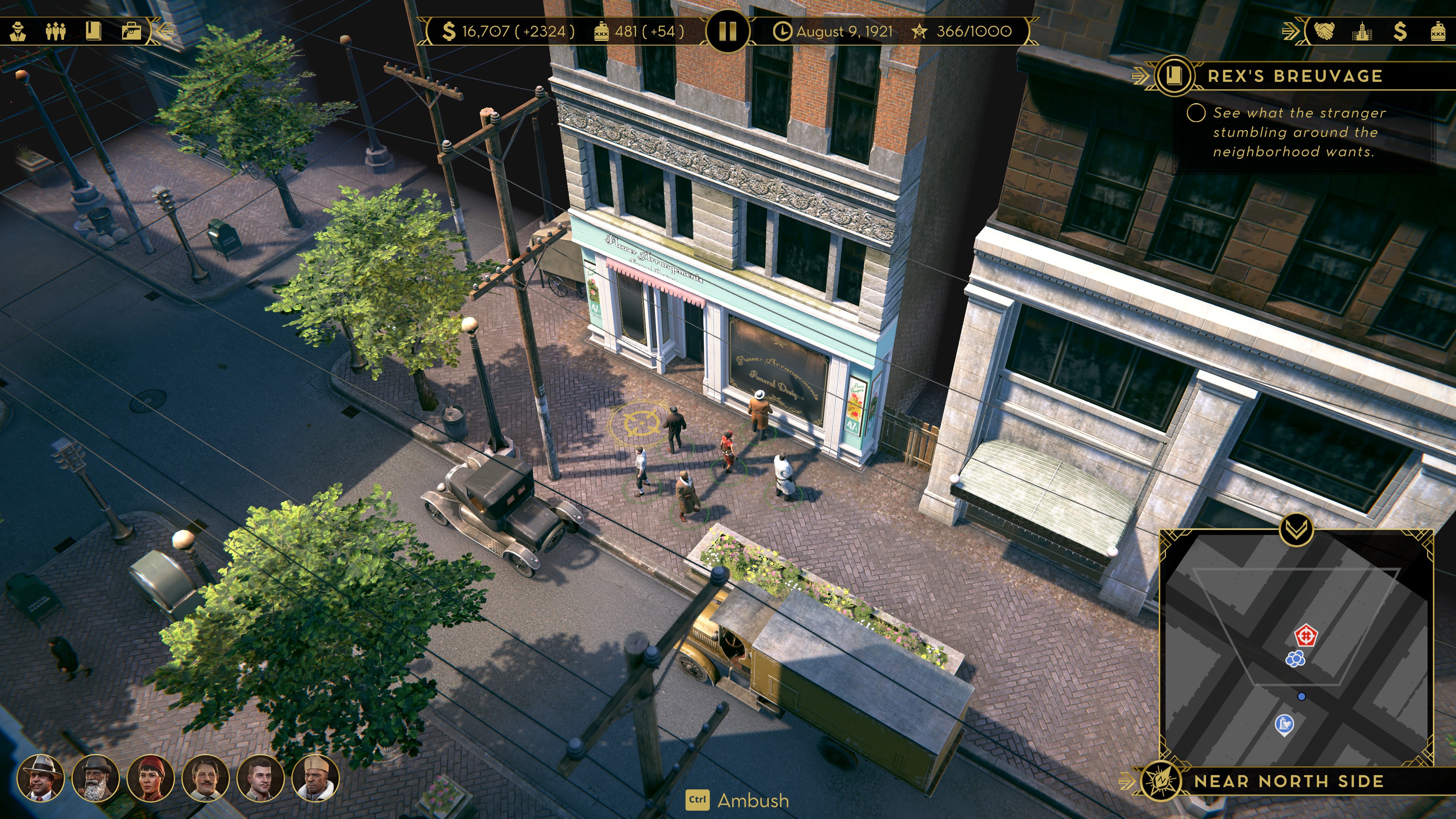 From here, your goal is expansion and conquest. To run a successful racket, you need a place that produces alcohol, and a place that sells it. Breweries do the former, while speakeasies, casinos, and brothels all help with the latter. Casinos and brothels don’t actually need alcohol to run, but it encourages your gamblers to gamble and limbers up your brothel’s clientele.
There are three main ways to acquire more rackets. The first is to buy them, which is very expensive. The second is to forcefully acquire buildings from local thugs, then convert them into the racket of your choice. This is cheaper, but still expensive. The third is to steal them outright from rival gangs, which is free but may incur the wrath of your rivals. 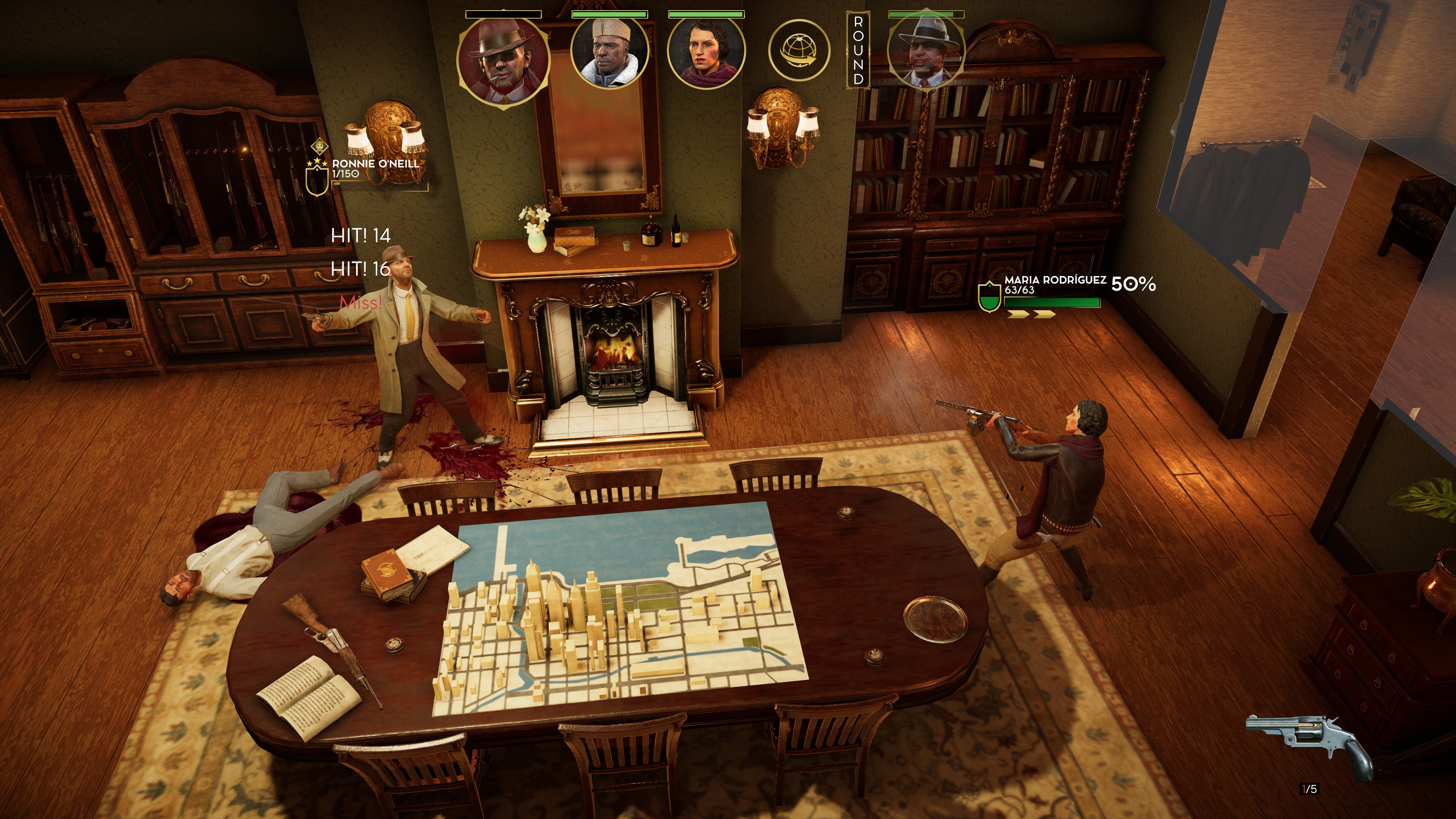 These are the fundaments of Empire of Sin’s play, but they aren’t where its heart lies. While by day you’re claiming building and building breweries, Empire of Sin also moonlights as an isometric RPG. Each boss exists in the game world as a character with their own questline to pursue. Al Capone’s initial quest revolves a friend freshly arrived from New York, who is apparently being stitched up by a local gang. It transpires the situation is murkier than that, and Capone has to choose how to deal with his less-than-reliable friend. The missions are simple and their choices often binary, but they help lend Empire of Sin a personality, a human side many management sims lack.
Most of Empire of Sin’s personality, however, is not in its bosses but in its henchmen. There are around 100 bespoke henchmen in the game, and you can recruit up to 10 of them at any given time. Each henchman has a specific combat class, personality, relationships with other henchmen, and even a back-story that comes with its own set of missions. Their characters also evolve as the game progresses. As an outcome of an early quest, one of my closest henchmen was sent to prison. While in prison, he suffered a traumatic experience which on release resulted in an alcohol addiction. This made him bolder in combat, but his staggering slowed him down when moving around the map. I was on the verge of firing him, but then I recruited a mob doctor to my party, who managed to sober him up. 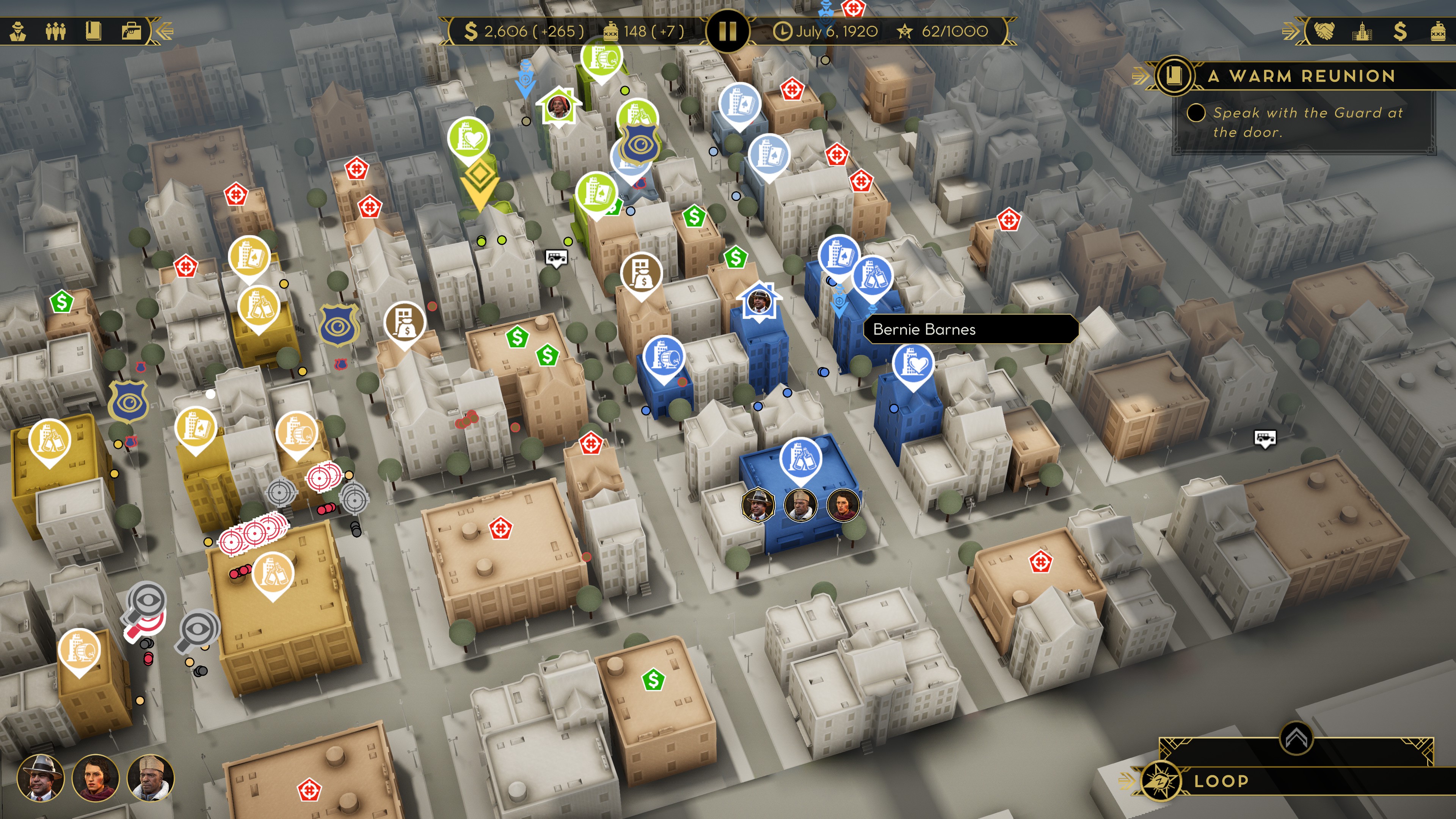 This kind of dynamic storytelling shows Empire of Sin at its best. The game’s systems also attempt to tackle broader themes about mob violence. If the district you’re currently in sees a lot of fighting, it’s Danger level will increase, while its Prestige level will decline. This means more affluent clientele will avoid the district, and the people that remain can’t afford premium quality alcohol. This forces you to sell cheaper booze, lowering your overall profits.
If all of this sounds fun and interesting, it probably could be. Sadly, it isn’t. The more immediate problem is that Empire of Sin is riddled with bugs. Some of these are weird but innocuous, like character clothes changing colour when they die. But there are also more significant issues, like characters completely disappearing from your party, who can only be recovered by firing and re-recruiting them (at considerable cost). Some bugs, like dialogue boxes refusing to close, can even corrupt your save. 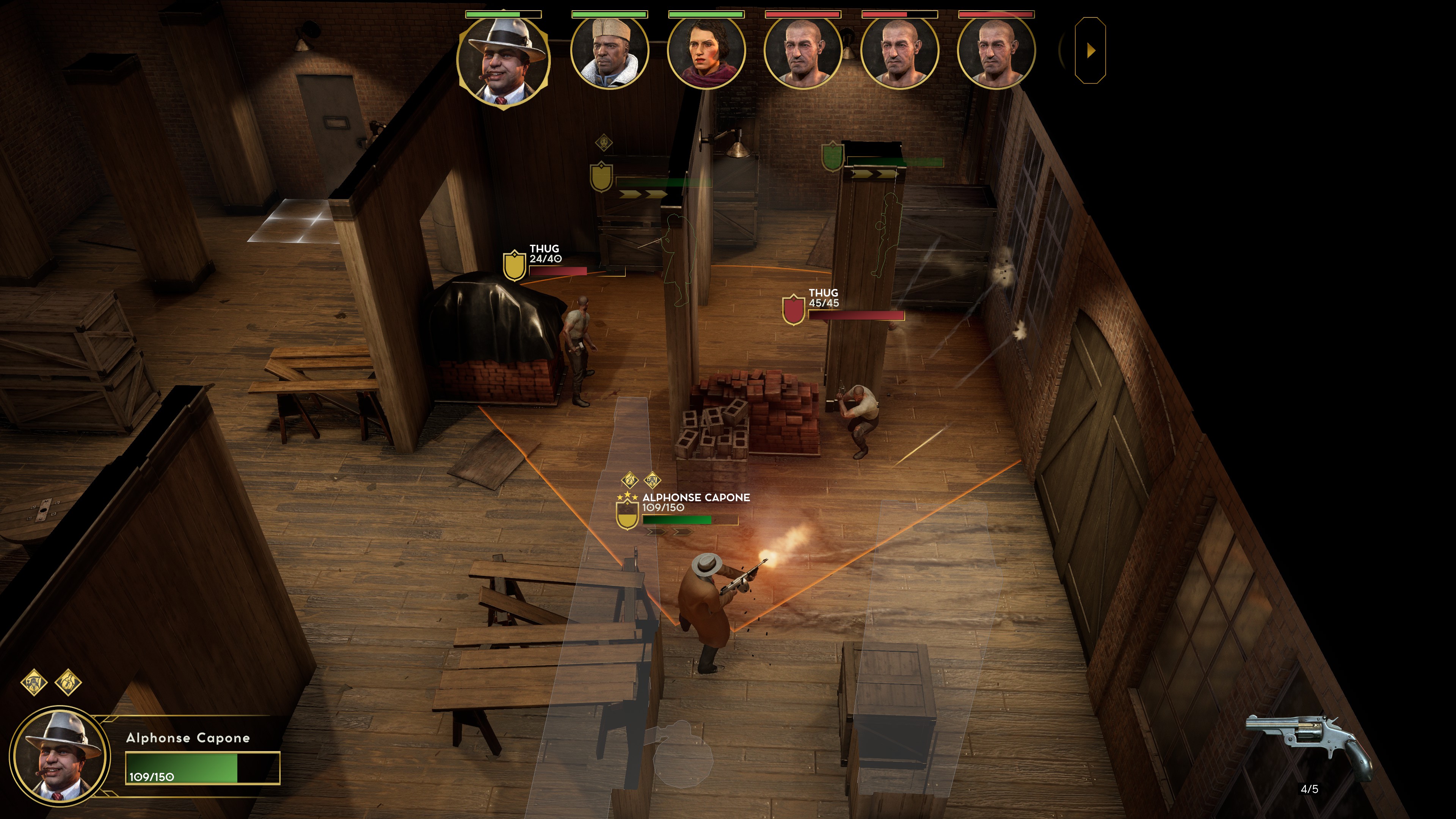 Obviously, these are substantial issues, but they are solvable. But Empire of Sin’s problems run deeper than this. It starts with combat, which as turn-based combat systems go is acceptable. It isn’t as deep as X-COM or as slick as Gears Tactics, but it nonetheless offers a decent tactical challenge, and some of the abilities are satisfying to use. Unfortunately the combat wastes any goodwill it builds up on a torrent of tedious, low-stakes battles. This issue is particularly irksome if you go to war with a rival faction, whereupon they’ll immediately dispatch all their forces to attack your rackets, forcing you to play five, six, maybe more combat encounters in immediate succession. Some of these won’t immediately end once you’ve killed all enemies either. If AI police and third-party gang members get involved, you’ll have to wait until one of these has killed the other before the encounter resolves.
Frankly though, I’d rather fight all the rival factions than have to listen to them. Empire of Sin has some of the most bothersome AI I’ve encountered in a strategy game for ages. Almost every couple of minutes, one will come up to you demanding protection or asking you to join them in a war. Not only is it obtrusive, it makes the game less immersive because all faction behave in the same, mithering way, making it feel less like you’re dealing with intelligent opponents. 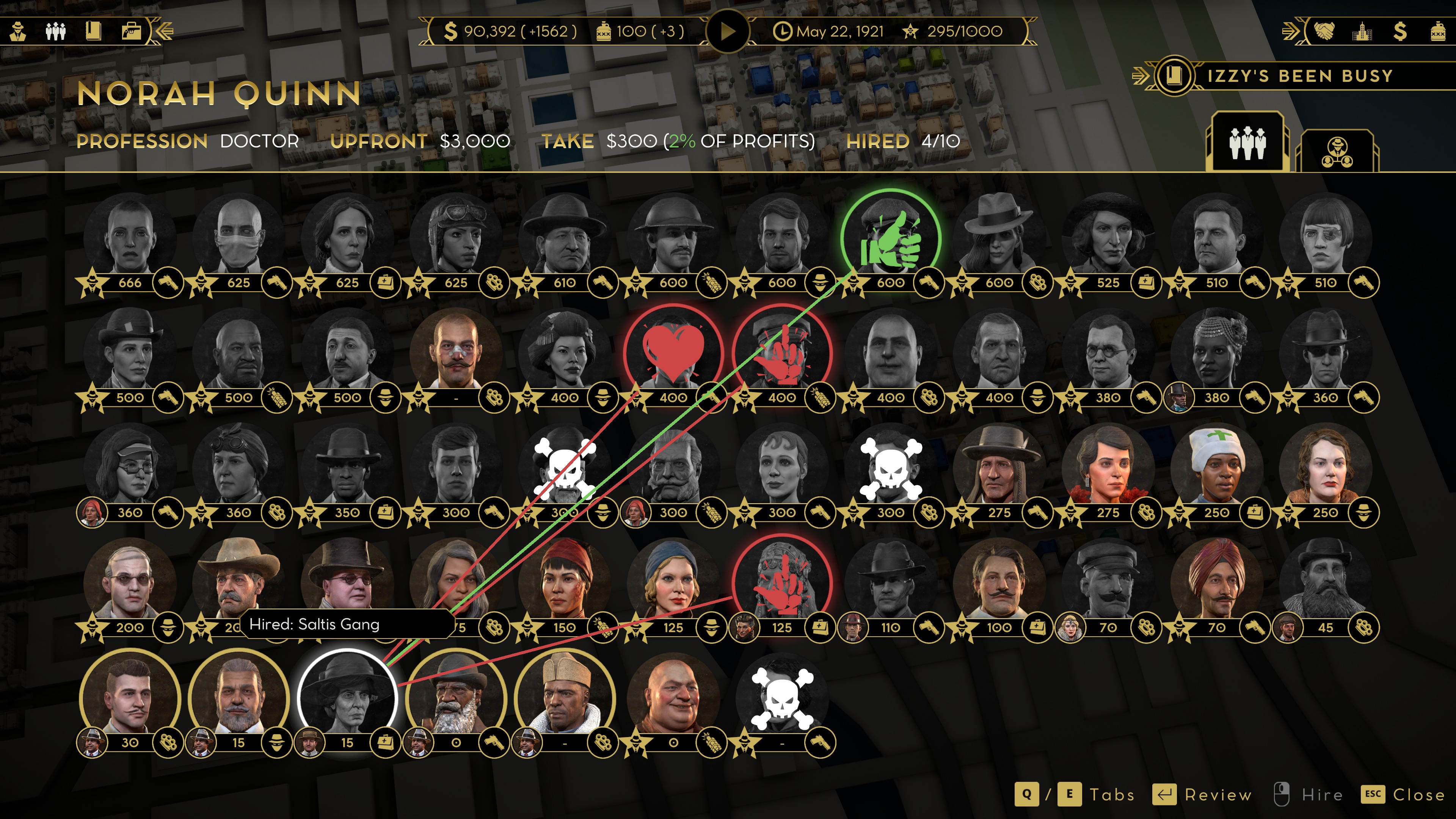 Empire of Sin’s biggest issue, however, is that everything I’ve just mentioned can be circumvented by walking into an enemy faction’s safehouse and killing the boss outright. Once you’ve got a decent party line-up, this is straightforward to do, and if you succeed, you immediately take over their entire enterprise. There are no repercussions whatsoever for doing this either. Some rival factions might get annoyed at you, but you can just rock up and murder them as well. It’s a deeply unfortunate oversight that means, beyond the early stages of the game, you don’t have interact with about 70% of the core systems.
If I sound like I’m sticking the boot in, for once I don’t want to. For all Empire of Sin gets wrong, I don’t believe that it’s a lost cause. There’s undoubtedly potential here, and given six to twelve months of bug-fixing and mechanical rebalancing, it could well be a fantastic strategy game. At the moment though, it’s a bit of a mess. 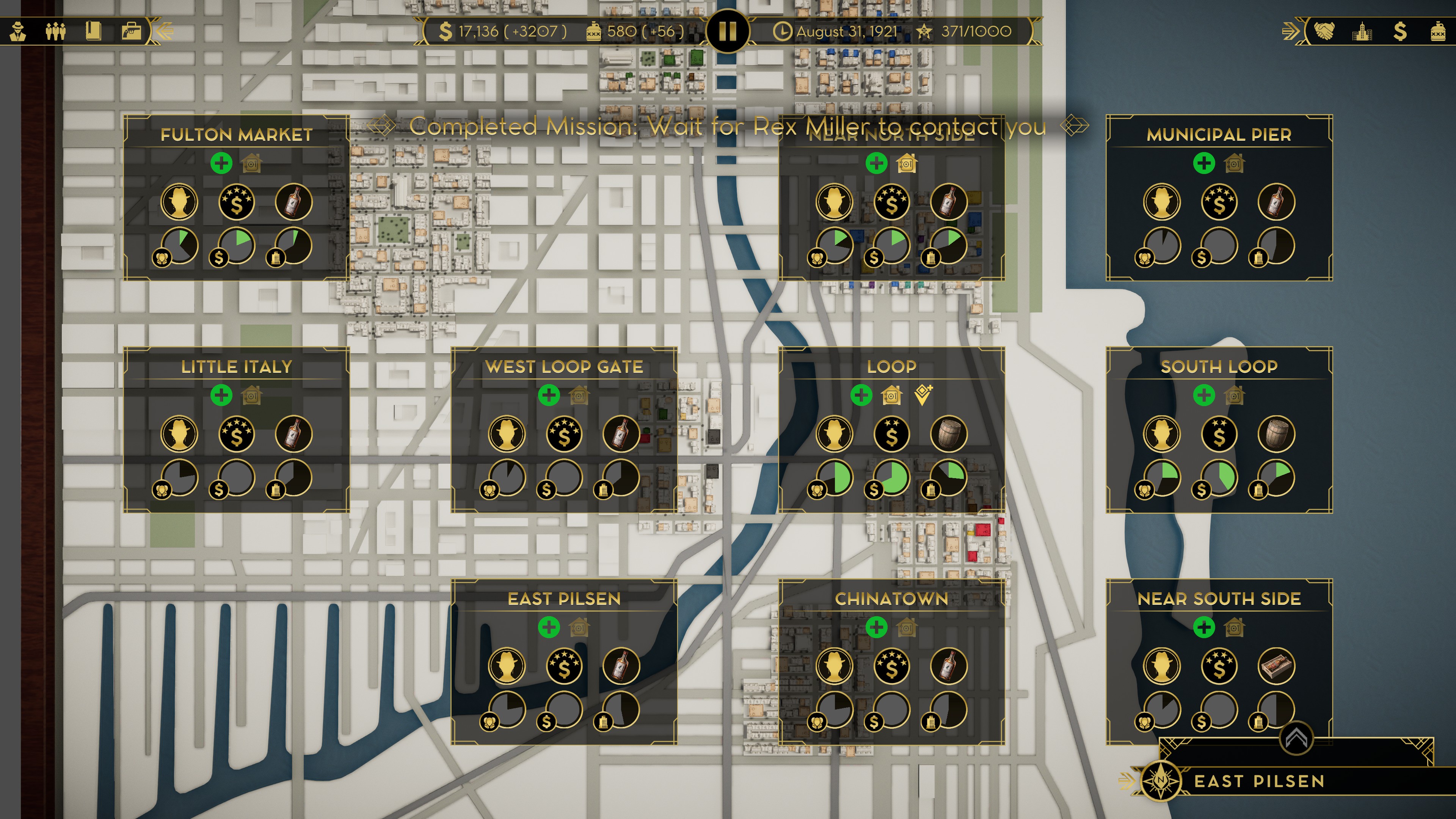