The In Win Classic Series, announced earlier this year, is one of the firm's most premium ranges. Initially available in 750W and 900W capacities, both with an 80 Plus Platinum efficiency rating, the company is clearly targeting builders of high-end PCs, something that the price reflects. Higher wattage models are said to be on their way, although the 1,000W and beyond market is surely even more niche than it once was following Nvidia's decision to drop official support for three- and four-card SLI setups in games. Click to enlarge
We've the 900W unit in for review, and a very attractive unit it is. It's 165mm deep, making it relatively compact for its capacity, and sports a brushed aluminium chassis with rounded edges and a glossy logo side section.

Further bolstering its appeal to enthusiasts is its fully modular cable set, giving you maximum flexibility for cable routing. The cables are flat and black for maximum discretion, excusing the main 24-pin cable which is rounded and neatly braided. With four 8+6-pin PCI-E connectors, nine SATA, six Molex and two floppy headers, you're well covered on all fronts and the length of all cables is fitting for larger, premium tower cases where the C 900W is likely to be housed.

Click to enlarge
A single, hypro-bearing 120mm fan behind a honeycomb grille cools the unit. It's a shame In Win was unable to fit a larger model in, and unlike much of the competition the C 900W is not semi-fanless.

Unlike most PSUs today, In Win has opted for a quad-rail design, with each 12V rail capable of handling up to 25A (300W) and the entire 900W capacity able to be delivered solely along the 12V rails if necessary. Sadly, there is no ambient temperature rating given. Click to enlarge
In Win, which designs and builds the PSU itself rather than relying on a third-party OEM, is using DC-to-DC topology, and makes sure that Japanese aluminium electrolytic capacitors, each rated to 105°C, are used throughout the entire PSU.

In Win offers a pretty generous seven-year warranty with this PSU, although some PSUs from EVGA, for example, go all the way to ten years. 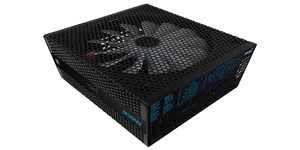 Even PSUs can be RGB these days, but this high-end Aerocool model has a few other tricks up its sleeve.