Blizzard has revealed a new iPad, PC and Mac based card-battle game set in the Warcraft universe.

Hearthstone: Heroes of Warcraft will be a free-to-play game centred around building decks of cards and duelling with other players. The decks will be themed around different World of Warcraft character classes.

Blizzard Entertainment chief creative officer Rob Pardo told Gamesindustry International that Hearthstone would be a way for the company to learn more about the free-to-play business model that is seeing a great deal of success in the industry.

'We really felt like there was opportunity with these collectible card games that hasn't really been realised in the digital online space,' said Pardo.

Developed by a team of only 15, Blizzard intends to launch a beta for the game soon with an option to sign up to participate available on its site.

'We've always loved collectible card games at Blizzard, so it's been exciting to bring everything we love about the genre to life in Hearthstone,' said Blizzard chief executive Mike Morhaime during the announcement at PAX East. 'We're putting a lot of focus into creating a fun new game that's easy to pick up and play, but also has a lot of depth. We can't wait to share it with everyone.'

Although Hearthstone will initially be heading to the PC, Mac and iPad only, the studio hasn't ruled out adding further platforms including Android or Windows tablets later on.

Blizzard has already lent its license for a physical collectible card game initially produced by Upper Deck Entertainment before the rights moved to Cryptozoic Entertainment. The game allows players to either fight each other or team up to defeat raid decks.

Blizzard recently saw success with the release of Heart of the Swarm, its first Starcraft 2 expansion, selling 1.1 million units in just two days. The studio's flagship MMO World of Warcraft is also continuing to remain strong with approximately 9.6 million subscribers according to a recent investor call for Activision Blizzard's fourth quarter 2012 earnings. 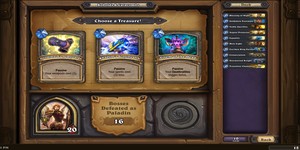