Cooling specialist Cryorig has hit Computex with the announcement of a family of all-in-one liquid-cooling kits and power supplies featuring integrated Internet of Things (IoT) connectivity.

Known for its air-cooling heatsinks, Cryorig's latest product line is the A Series Hybrid Liquid Cooling (HLC) all-in-one units. Designed, the company claims, to address the issue of current all-in-one liquid-cooling designs causing poor airflow to components situated around the CPU, the HLC design includes a reversible angled 70mm fan on top of the water-block. The claimed result is a reduction of more than 10°C in the temperature of the voltage regulation modules (VRMs) located around the CPU socket compared to a traditional all-in-one cooler design, and similar improvements to RAM temperatures and even the GPU's running temperature.

The entry-level A40 HLC pack includes a 240mm, 25mm-thickness radiator with two 120mm 2,200rpm PWM-controlled fans and a copper micro-fin water-block with integrated Airflow Circulator fan and pump; the A40 Ultimate upgrades this to a 38mm-thick radiator; the A80 tops the range out with a 280mm 25mm-thick radiator and two 140mm 1,850rpm PWM-controlled fans plus the same water-block and Airflow Circulator.

Where the A Series liquid coolers are ready to launch this summer, Cryorig's second Computex unveiling is described as a proof-of-concept. Dubbed the Cryorig Pi, the new family of power supplies boasts integrated Internet of Things (IoT) connectivity which allows for remote wake-up through what the company describes as Zero Hassle Hardware Wake (ZHH Wake). Patent pending, ZHH Wake controls the PSU and motherboard on/off signals directly rather than relying on the motherboard's Wake on LAN or Wake on Power functionality. Connecting to the home network via Wi-Fi, the Pi power supplies can be toggled on and off remotely and also provide fan-speed control, readouts of energy usage and PSU health, and even electricity bill estimations to a dedicated smartphone application.

The A40, A40 Ultimate and A80 liquid coolers are to launch this summer, with the Pi power supplies to launch some time next year in 660W, 860W and 1KW variants. Pricing has yet to be confirmed. 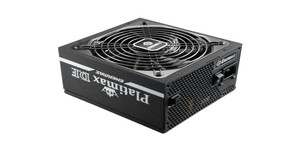 Concentrates on ITX boards for now.