EK Water Blocks has announced its first water block for an AMD AM4 motherboard, offering a monoblock compatible with Asus' ROG Crosshair VI Hero motherboard for anyone upgrading to Ryzen.

AMD's switch from the split AM/FM socket family, the former of which was exclusive to CPU-only products and the latter to APU products with integrated graphics, to the joint AM4 socket type promises wider compatibility for future devices at the cost of a slightly awkward transition period. This has been primarily felt by those upgrading to AMD's latest Ryzen chips and looking to reuse existing coolers, most of which are incompatible with AM4 without an adaptor or replacement mounting system, but has also been causing headaches for those looking to add high-end liquid cooling platforms and finding a lack of compatibility at launch.

EK Water Blocks is one of the companies looking to fix that, and its first attempt - following the launch of upgraded brackets with AM4 support for its existing designs - is an all-in-one monoblock for Asus' ROG Crosshair VI Hero motherboard. Based around the company's EK-Supremacy Evo design, the block covers both the CPU and the power regulation MOSFETs. According to EK, the design is also compatible with weak pump systems and includes a redesigned cold plate with improved thermal transfer from the integrated heatspreader (IHS) of AMD's AM4 APUs and CPUs.

As an added feature, EK has also included a four-pin RGB LED lighting strip which is compatible with the motherboard's RGB lighting header and Asus' Aura Sync control software. While integrated into the block, the company claims it can easily be adjusted or removed if required thanks to a replaceable cover and can even be replaced with a custom lighting strip should buyers prefer.

EK Water Blocks has announced pre-orders for the block in a nickel finish at €119.95 (£102 including VAT) via its official web shop. 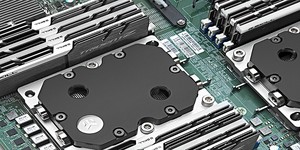 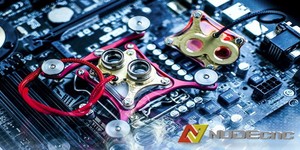 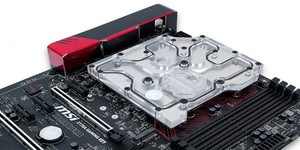