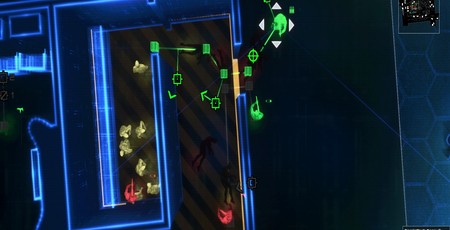 Seven years on, Frozen Synapse remains one of the most thrilling and distinctive strategy games on the PC. In the game’s top-down, squad-based tactical battles, both players plan their movements unseen by their opponent, and resolve their decisions simultaneously. You can try to deduce how your opponent will move by running through simulated scenarios, setting out waypoint-based plans for both your units and theirs. But you won’t know the outcome until you hit the game’s terrifying “PRIME” button that sets your choices in stone. Frozen Synapse 2 wraps a much bigger game around this core, but its best moments still occur at the molecular level. After one brilliant and one disastrous turn, my assault on an office block has come down to a one-on-one duel. In the red corner, the AI’s shotgun-toting mercenary, which has barricaded itself in a twisting nest of small rooms and corridors. In the green corner, my assault-rifle unit, the best all-round combat unit, but outclassed at close range by a shotgun.

It’s a perfect stalemate. If he steps outside, he’s dead. If I step inside, I’m dead. I’m the attacker, so the onus is on me to step inside. I run through countless scenarios, but the only way I can emerge victorious it to round the corner in a crouched position, while targeting my opponent’s position precisely. But this will only work if my opponent stays where he is, and I reckon that he’ll try to second-guess me by moving. So here’s what I do: nothing. I give my soldier no movement orders, and simply direct him to aim toward the exit of the building. As I suspected, the AI jumps. The shotgun unit moves out of its defensive position, crosses the room where I would have moved through had I acted on that plan, and continues down the corridor, far enough that his shotgun no longer conveys a clear advantage. Now he’s vulnerable, and all my unit has to do on the next turn is step inside, raise its rifle, and pop, victory achieved.

These tactical battles were brilliant in Frozen Synapse, and they remain brilliant in Frozen Synapse 2. But it’s a delicate formula, and so in changing it Mode 7 has wisely been sparing and specific. The main additions include new units to play with, such as vatforms which sport knives, flamethrowers, and miniguns, alongside a broader range of tactical choices allowing you to develop more nuanced plans. The game has also received a substantial visual overhaul. Frozen Synapse had a distinctive style, but a rather plain execution. The sequel has a much smoother, slicker look, with more detail infused into its cobalt-blue environments. Whereas before you’d navigate your team around largely abstracted geometry, here you’ll take cover behind easily identifiable cars and trees, desks and bookshelves. The less rigid angles of these objects also add nuance to tactical planning.

If you’re into Frozen Synapse for the multiplayer (which is arguably the best way to experience its simultaneous turn-based strategy) then a prettier game with a slightly expanded tactical palette awaits. But the most substantial changes are found in the single-player, which switches out the linear campaign of the previous game with a grand strategy game inspired by X-COM: Apocalypse. Here, you assume control of one of many factions vying for control of a cyberpunk city named Markov Geist, the streets and skyscrapers of which are rendered in a crisp, abstracted wireframe. A rough objective is provided in the form of a new and mysterious faction named Sonata, which begins making violent incursions into Markov Geist. Your faction is elected as the primary task-force designed to respond to them.

When it’s discovered that Sonata leaves powerful cybernetic relics in its wake that can massively boost a faction’s influence, suddenly everyone from banking moguls the Diamond Brothers to the hacker group GUEST start trying to muscle in on your patch. Hence, you must attempt to gather thirteen of these relics before any other, initially more powerful factions amasses seven of them. Really though, this is just a loose premise for you to build your faction’s story upon, devising your own strategies for increasing your resources and dealing with the other factions. As well as dispatching strike forces for dealing with Sonata, you can also take on side-contracts which will earn you extra money, ranging from low-paying delivery jobs offered by the Parcel Tossers faction, to more lucrative (but more dangerous) missions such as patrolling buildings or establishing road checkpoints for a set number of hours. Funds you earn can be used to recruit new mercenaries and establish new squads, or to purchase new buildings to expand your influence and increase your response time across the map.

You can also reject any kind of structure and create missions of your own. You’re able to call up any faction leader and ask them for jobs, invest in their organisations, or forge outright alliances. You can also attack their forces as they move through the streets, assault their buildings to steal any cash stashed there, or attack their headquarters to assassinate their faction leader. Any such encounter is resolved in the game’s tactical mode, meaning that player skill is as important as faction strength. The strategic potential in Frozen Synapse 2 is enormous. But I found myself frustrated by the game’s opacity and its rather relentless pace. The tutorial is overwhelmingly focussed on the tactical side of the game, and woefully inadequate when it comes to showing you how you can exploit the city’s systems to your strategic advantage.

I also felt like I was constantly struggling to keep up with the evolution of the city. Establishing a second strike force so I could respond to more than one event took ages, at which point the range and capabilities of Sonata and the enemy factions had rapidly outgrown mine. Every mission you fail on behalf of a faction will result in them cutting their funding contribution, and you often have little choice but to do this as Incursion pop up all over the map. I also failed more than a few missions because my squad simply wouldn’t intercept an enemy strike force while chasing them around the map. I was able to compensate for my strategic blunderings on the tactical side, often outfoxing opposing squads double my own strength. But it meant that in the early to mid-game I rarely had the chance to experiment with the range of possibilities that Frozen Synapse 2 has to offer. No doubt more talented strategy players than I won’t encounter this problem. But I nonetheless think the game would benefit from a more guided opening, giving you a glimpse of the choice and power open to you before turning its factional screws.

That said, Frozen Synapse 2 undoubtedly nails its cyberpunk theme. Frozen Synapse’s faction leaders are by and large cool and cerebral characters, seeming both professional enough for you to deal with and unpleasant enough for you to casually dispatch should you so choose. They also have visibly different personalities, beliefs, and goals. I became quite fond of the Parcel Tossers and their scrappy underdog vibe, reminiscent of a unionised Uber cooperative. The story also captures the weirdness inherent in Cyberpunk, that uncertainty of where the Internet ends and reality begins, an ambiguity it plays with nicely. That it achieves this with just unvoiced text and a handful of character portraits is very impressive.

In a weird way, Frozen Synapse 2 is both an improvement on the original and a less pristine experience. The tactical side of the game is better looking, more refined, and offers a greater range of options. Meanwhile, the strategic city is a far more interesting scenario for single-player action but also leaves more room for flaws to creep in, which they inevitably do. Fortunately, these issues come mainly down to balance rather than anything more fundamental. As it stands, I’d happily recommend Frozen Synapse 2, and with a few months of tweaking and patches, I reckon it’ll be something really special.

Tactical indie darling Frozen Synapse is getting the console treatment in a release for Playstation 3 and Playsation Vita later this year.

Mode 7 has announced Bit-Gamer favourite Frozen Synapse for the iPad.